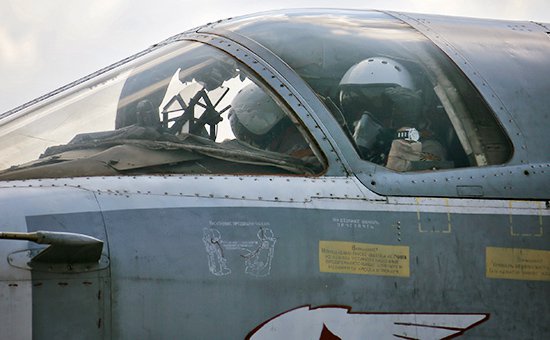 Russian aviation continues to strike blows to positions of Islamists in Syria. On Monday afternoon, the aircraft flew 15 sorties from the base of Hamim and attacked by ten objects, said the official representative of the military Department Igor Konashenkov. According to his statements, the aerospace forces (VKS) Russia will use in the skies over Syria, the su-34, su-24M and su-25.

The venerable and multi-tasking

According to an analyst of the American CNA Corporation Michael Coffman, the Russian group includes both “venerable Soviet fighters” and “multitasking most modern aircraft can offer.”

The most modern Russian aircraft involved in operations in the skies over Syria, the su — 34. This fighter-bomber of the fourth generation that are able to fight ground and air targets. It is also classified as an attack bomber, capable of dealing precise blows, not only in tactical but also in the operational depth of enemy territory, stated on the website of the Ministry of defense. He officially accepted on arms only in 2014, but, according to the “Military-industrial courier” that was used in the war with Georgia in 2008, ostensibly taking out Georgian radar station that is partially “blinding” the enemy air defenses. On the Russian airbase in Latakia, according to Syrian human aviablow seen six of these machines.

At the airbase in Latakia have also seen four interceptor su-30 fourth generation, designed to defeat air targets, but is capable to strike ground targets. While official reports about the use of these fighters were not. They were based on a deeply modernized machines of the su-27 family. The design of these aircraft started in the Sukhoi design Bureau in the late 1969 as a response to the creation in USA of a fighter F-15. The first contracts to supply the Ministry of defense modernized version of the su-30CM was signed in 2012.

Another Russian front-line bomber in Syria, the su — 24M, the machine of the third generation. The family of the su-24 was designed in the late 1960-ies, and adopted the aircraft was in 1975. Upgraded production su-24M were delivered to the troops in June 1981. The car received a new sighting equipment for the army was taken guided weapons with laser and TV-guided: guided missiles and guided aerial bombs. In Syria was seen 12 such aircraft.

The main “workhorse” in the Syrian campaign HQs remains of the Russian su-25SM. Work on the creation of the su-25 began in 1968, the weapons he did in 1981. the New aircraft was designed to be extremely simple in operation and maintenance of subsonic jet aircraft. In the war in Afghanistan, these aircraft had a high survivability. Last modernization took place in the early 2000s, when it was created equipped with digital electronics a modification of the su-25SM. In Syria this machine is equipped with unguided 500-pound high-explosive bombs FAB-500 in the areas of contact between the troops of Assad with the rebels. Only a Russian air base spotted 12 of these machines.

Su-25, for example, have established themselves as the aircraft in direct support, but at the same time they showed themselves vulnerable, particularly for man-portable air defence systems, said “Bi-bi-si” Kofman. Su-24M2 he called a classic, but “worn” tactical bomber, but the su-34, on the contrary, deserved his praise. “They have never been used in war, and Russia is not just using them, but actually experiencing them,” he said.

Air and space forces of Russia round-the-clock use over Syria means space, airborne and other intelligence, official says the defense Ministry spokesman Konashenkov. About the use of drones show videos of beats, ATT published by the press service of the defense Ministry. About the early reconnaissance flights of Russian drones in the skies over Syria in September, wrote Agency Reuters citing two U.S. officials. The news Agency called them the first operations of Moscow in the sky over Syria.

Officially models of these drones are not known, but judging by published photos rebels downed drones in the sky in July near Latakia, it’s the drones “Orlan-10” (seen also in the war in Donbass) and “Aileron-SW”.

For the analyst of Stratfor SIMA Tak question in the first place is not in combat characteristics of Russian aviation, but pilots familiar with modern equipment and “modern methods of effective deployment in a war zone”. “All the added accuracy of laser guidance systems or weapons pointing at the signal of global navigation satellite system may be useless if you can’t decide where you need to beat”, he said Voice of America.

The backwardness of the Russian air force calls a myth military expert Alexander Khramchikhin. Ten of the 30 aircraft at the Russian air base in Syria is the su-34 and su-30, adopted already in the XXI century, says the expert. “In the U.S. air force, the ratio of old techniques and modern about the same”, — says Khramchikhin. According to him, neighbouring countries in the region most of the aircraft even more old. Even the coalition led by the USA uses upgraded B-52 with a 50-year history, says the expert.

Hramchihina agree with chief editor of the magazine “national defense” Igor Korotchenko. According to him, the normal cycle of creation of modern aircraft is 15-20 years. The story of the creation of the principal American fighter-bomber F-15E out in the 1970s, and most modern multi-purpose fighter F-22 fifth generation — in the 1980s, recalls Korotchenko. “The su-34 is a completely new aircraft with outstanding performance generation 4++. In the West there are no specialized bombers with these characteristics,” — says korochenko. To solve the tasks of combating terrorist infrastructure is suitable and recent modernization of su-25 and su-24, the expert believes.

On the basis Hamim in Latakia is also present and a group of Russian helicopters — a few units of shock Mi-24 multi-role Mi-8. According to the defense Ministry, the helicopters have not been applied by the Russian HQs in Syria. Their mission — rescue operation involving special forces in the event of a crash of the Russian aircraft and evacuation catapulted pilots, said the source in one of power structures, who is familiar with the set helicopter pilot in Syria tasks.

Mi-8 is one of the most successful developments of the Soviet helicopter industry still 1960-ies, can be used in extreme weather conditions. The Mi-8MTV, recognized experts in Latakia, meant to carry personnel and cargo, including weapons. Attack helicopters Mi-24, discovered by the French journalists of TF1, proven in more than 30 armed conflicts around the world, starting with the civil war in Angola and ending the war in Ukraine (they are used by the Ukrainian army).