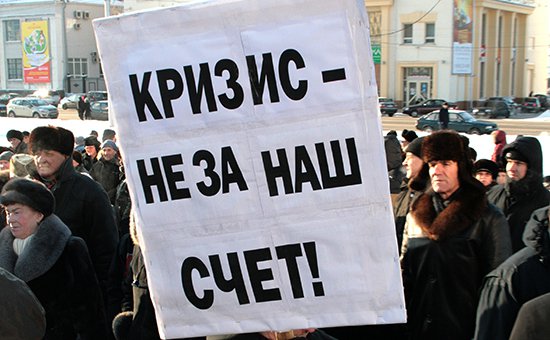 The continuing decline in real wages and incomes from entrepreneurship can accelerate the drop in real incomes of the population by the end of 2015, follows from analytic material prepared by experts of the Russian Academy of national economy and public administration (Ranepa). The Russians have become increasingly aware of the negative Outlook: the number of people looking to the future with confidence, to fall sharply declined, according to fresh polls, Ranepa.

“Significant difference from previous periods of our observation is the growing dissatisfaction of the population deteriorating socio-economic conditions”, — stated in the Bulletin. If winter and spring a significant proportion of the population assessed the state of the economy as a stable, by the end of the summer “there has been a trend of transition of a part of the “crisis loyal” citizens in the number of dissatisfied or pessimistic”.

The mass of the duration of the crisis began to lean in direction of pessimism, according to the results of surveys Ranepa: the share of those forecasting a worsening of the economy within 1-2 years or longer (34% in August compared with 27.6% in April), at the same time decreased the share of those who expect improvement (up to 21.2% of the respondents in August, from 38.3% in April).

The growth of negative expectations is observed in all types of settlements, but particularly worried residents, said in a Bulletin. The proportion of respondents from large cities that are waiting for themselves the negative consequences has increased to 20%. 70% of residents of large cities already affected by the crisis, according to experts.

The Committee of civil initiatives Alexei Kudrin this week said that it begins to measure the regions social, political and economic risks. As follows from the materials Committee, “regions of risk” from the point of view of the socio-economic situation is Komi, Karachay-Cherkessia, Chechnya, Ingushetia, Pskov, Astrakhan, Nizhny Novgorod, Kemerovo, Ivanovo region.

In the first half of 2015 the number of poor in Russia increased, say analysts at the Ranepa. The share of population with money income below the subsistence minimum was 15.1%, which is 2 PP higher than in the corresponding period in 2014. Poor people, often before remarked the positive changes, ceased to notice them. While medium and high net-worth respondents, little changed their estimates.

In January—August 2015 cash income has declined more slowly than wages, according to the Bulletin. In the structure of incomes in the second quarter of 2015 (compared to the same quarter of the previous year) decreased share of wages and incomes from business, but grew the share of social benefits (from 18.8% to 19.3%) and income from property (from 4.8% to 6.1%), writing experts.

Opportunity to contain the fall in real disposable monetary incomes are exhausted, conclude analysts. Purchasing power is already significantly reduced, maybe by the end of the year to fall even more. Risks of poverty, especially pensioners and families with children in these circumstances may increase further.

In the first half of 2015, the share of monetary incomes of Russians used to purchase goods and services decreased by 3 percentage points (from 77,2% to 74.2%) compared with the first half of 2014. Most of all decreased the purchasing power for vegetables, sugar, rice and other cereals, frozen fish. The subsistence minimum in the same time increased for the entire population. In the second quarter it increased for the working population and pensioners to 22% for children at 24%.

The developing crisis led to the decline of employment in force on Russia, experts say. On a moderate or weak growth of unemployment, growing underemployment, allowing to reduce the costs of employers. “The Russian occupied easier willing to tolerate earnings reduction than loss of work”, — experts say. The General trend in the deterioration obvious, follows from the report: the decline of incomes occurred in 67 regions.

The second reason for the low level of unemployment (5.3% in August, 2015) — demographic: on the market small generation 1990 years of birth, and it leaves a significantly larger number of generation of the 1950’s year of birth. The third reason is the large number of migrant workers who in the absence of work leave, freeing up space on the labour market.

Dynamics of regional budget expenses on social purposes shows that “optimization” is growing. In the first half of the 25 regions have reduced spending on education, including Moscow — 12% (despite growth of incomes of the capital budget by 14%). Health care costs have reduced from 11 regions, including Adygeya Republic — 20%, Amurskaya oblast 9%, Moscow and Sverdlovsk region — on 7%.

“In General, the dynamics of revenues and expenditures of regional budgets in the first half of 2015 looks less problematic in comparison with the dynamics of socio-economic development of regions. The reason is that the budgets of many regions for the third year lie “at the bottom” and the economy, investment, income and consumption of the population began to fall later. The probability of reducing the income of regional budgets in the worsening economic conditions increases. In such a scenario “optimization” of social spending will go even faster, covering more and more regions”, — analysts say the Academy.