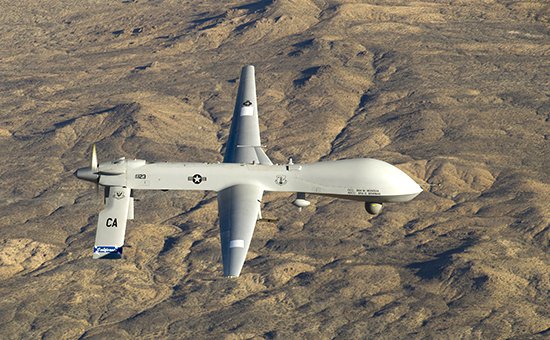 Both the interlocutor of TV channel said the incidents happened on the territory controlled by ISIS, including over Raccay, which is considered the de facto capital of the militants and the Turkish-Syrian border, near the city of Korba. Another case of interception occurred in Northwest Syria, near the city of Aleppo.

U.S. drone MQ-1 Predator is very easy to see on the radar, since it does not uses the technology of stealth (reduced visibility for radar), said one of the interlocutors of Fox News.

According to him, the Russian air force planes tried to shoot down us drones, but flew close enough that their presence was felt. Another source of the TV channel stated that “the Russians flew very close, but did not hinder the flight of the drones”.

Earlier today the official representative the Ministry of defense of Russia Igor Konashenkov said that the Russian defense Ministry has considered a proposal by the Pentagon about the coordination of joint actions in the fight against militants of the “Islamic state” (organization banned in Russia) in Syria. In the Agency assumed that these proposals can be accepted by Moscow.

On the eve of the Deputy head of the Ministry of defense of Russia Anatoly Antonov said that the defense Ministry of Russia and the U.S. working paper on interaction in aviation operations against ISIS in Syria.

“The Americans gave us the document that we’re working on. I want to say that in the General staff this document has received the support, we are working on it”, — said Antonov.

Before this, the U.S. military reported the first visual contact with the Russian jets in Syria. Russian planes approached U.S. aircraft at a distance of 20 miles (32 km).

At the same time, an unnamed U.S. official told Reuters that Russia announced its readiness to resume consultations with the US regarding the use of aviation in Syria. Before that, the Pentagon chief Ashton Carter called for the early holding of the second round of consultations on the prevention of possible conflicts between Russia and the U.S. in the skies over Syria.

Russia began to carry out air strikes on positions “Islamic state” in Syria on September 30. On the same day, the source of the Fox News channel reported that Moscow demanded Washington to stop flying over Syria, within the framework of the coalition against ISIS. According to the channel corresponding to the request of the American colleagues gave Russian diplomats.

Later, anonymous sources of the TV channel stated that US planes will not stop flying on the request of the Russian side. “There is nothing to indicate a change to our plans for operations in Syria,” he explained.

In the Kremlin information on the treatment of such requirement Washington has denied.