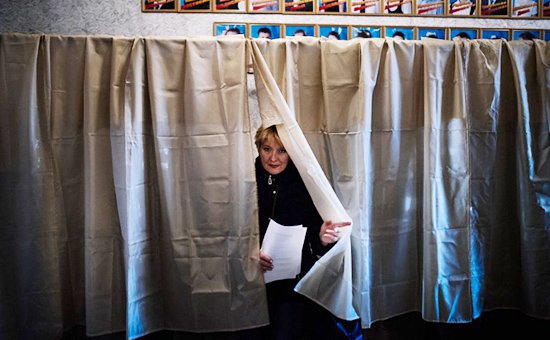 The self-proclaimed leadership of Donetsk and Lugansk national republics announced the postponement of the local elections, told Donetsk news Agency. The vote is scheduled for February 21, 2016.

The holding of local elections in Ukraine in recent months has been one of the unsolved problems of the current crisis in the South-East of the country. According to the Minsk agreements, reached in February, local elections were under the Ukrainian laws. The government DND and LNR appointed election unilaterally (on 18 October in the DNR and on November 1 in LC), which was regarded by Kiev as a violation of the Minsk agreements.

Leaders DND and LNR explained its decision by saying that the Ukrainian side has not agreed with them the adoption of the law on local elections and violated the process of transferring powers to the Donbass, but did not exclude the possibility of a compromise date. Western leaders have repeatedly stressed that it would not regard the holding of elections appointed by the republics violation of the Minsk agreements by Russia and urged President Vladimir Putin to put pressure on the Republic’s leadership to cancel a vote.

The issue of elections was discussed at the end of last week, during the meeting “Norman Quartet” with the participation of Putin, President of Ukraine Poroshenko, French President Francois Hollande and German Chancellor Angela Merkel. Following the meeting, Hollande said that the parties agreed to postpone the election to another date and take a separate Ukrainian law.

On Monday, the Minister of foreign Affairs of Russia Sergey Lavrov said that Putin promised to convey to the leaders of the DND and LNR “complex idea, put forward… French and German partners”. The leaders reviewed the recommendations of Hollande and Merkel held consultations with representatives of the OSCE and Russia and accepted the decision, the message close to the leadership of the republics of Donetsk news Agency.

A separate law for DPR and LPR elections in the Verkhovna Rada have not yet discussed. On Monday evening the first Deputy Chairman of the party “Block of Petro Poroshenko” Igor Kononenko said that the elections will be held when certain conditions are met: access to elections of all parties with Ukrainian registration, free access to mass media and disarmament.

In the statement of the representatives of the republics in the contact group on the settlement Denis Pushilin and Vladislav Deynego (it leads Donetsk news Agency) emphasized that the election law must be initialed by all members of a group and cannot change during the vote in Parliament.

The further fate of the Minsk agreements will depend on whether Kiev would agree to accept the rules working group, which will consolidate the agreements reached, says the source close to the leadership of the republics.

“We welcome the decision of the DPR and LPR. This is another example of a flexible and constructive approach in the interests of implementation of the Minsk agreements”, — commented on the decision to postpone the elections, press Secretary of the President of Russia Dmitry Peskov. The decision of the Republic greeted Hollande and Ukraine’s representative in the contact group Leonid Kuchma.

The elections in the breakaway republics broke political construction of the Minsk agreements, says Ukrainian political analyst Volodymyr Fesenko. With today’s decision, Russia demonstrated its influence in the Republic, and the last received argument before the Quartet that they have made concessions, said Boris Makarenko of the political techniques Center. “Inside the republics are likely to intensify the attitudes that Russia “merges”, — predicts Makarenko.

Elections instead of military action

The agreement about the withdrawal of weapons and guarantee a postponement of the election to freeze the armed conflict in southeastern Ukraine, says close to the leadership of the breakaway republics of the source . “It is open to political debate, which will not interfere with the war,” adds the source .

At the end of September participants of the contact group on Ukraine in Minsk was signed an agreement on the withdrawal of weapons with a caliber less than 100 mm from the contact line in the Donbass. On 3 October, after talks in Paris, Ukraine and the Republic announced the beginning of withdrawal of equipment.

The ceasefire in the conflict zone “continues and is strengthened”, said on Tuesday NATO Secretary General Jens Stoltenberg, calling an agreement to postpone the elections a positive step. “The parties announced that they will take from the line of contact tanks, and other weapons. It creates hope and strength”, — said Stoltenberg.

The withdrawal of weapons and the transfer of elections offer the prospect for implementation of the Minsk agreements, agree Fesenko. “If the New year will not be shoot, we will have a chance at stabilizing the ceasefire. Last year the elections became a pretext for the escalation of the conflict”, — said the analyst.

In the Minsk agreements, the process more important than result, says Makarenko. “All for the better that the parties exchanged mutual reproaches, than shooting each other” — sums up the expert.