The meeting of the head of the Russian foreign Ministry and U.S. state Secretary will be held during the week of the high level of the 70th session of the UN General Assembly. According to Sergey Lavrov, the US “had become more sensitive” to Russia’s position on Syria. 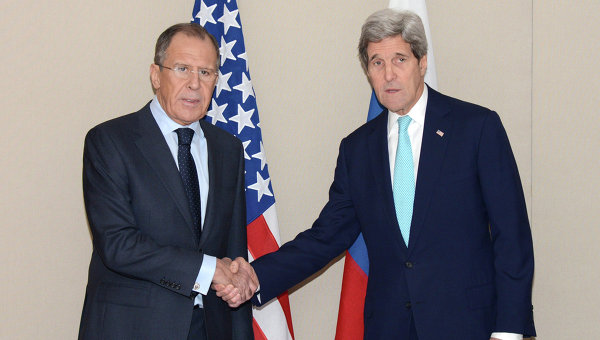 NEW YORK, 27 Sep. The official part of the programme of the Russian foreign Minister Sergey Lavrov in the framework of the week of high level of the 70th session of the UN General Assembly starts on Sunday.

One of the main points will be a meeting of the Russian Minister with the U.S. Secretary of state John Kerry, during which they are expected to discuss the Syrian crisis and the conflict resolution process in Ukraine.

On the same day, Lavrov will speak at the summit on the global agenda in the field of development after 2015.

Spotlight on Syria and Ukraine

The meeting between Lavrov and Kerry is planned for Sunday morning, before the speech of the Minister at the summit on the development.

It is expected that one of the main themes of the consultation will be the situation in Syria and Russia’s participation in resolving the crisis in that country. Earlier, official Washington at various levels have expressed concern in connection with information about alleged Russian military presence in Syria.

The Russian side, in turn, has repeatedly denied these data. In Moscow recognise that the Russian military experts in Syria, but only those that help the Syrians to develop incoming military equipment of the Russian Federation. It was stressed that Russia has long been supplying Syria weapons and military equipment in accordance with existing contracts and to counter the terrorist threat. A military base in Syria, according to representatives of the General staff of the Russian armed forces, not in plans.

Progress at the meeting of Lavrov with Kerry on the Syrian subjects is possible. Earlier the head of the Russian foreign Ministry said that, in his opinion, the United States “have become more receptive” to the Russian position on Syria.

Probably, the foreign Ministers of Russia and the USA will discuss the situation in Ukraine in the run-up scheduled for October 2 of the summit “channel four”.

Moscow have repeatedly stressed that leaves open a diplomatic channel for informing colleagues in Washington about the process of discussing settlement of the crisis in the “Normandy format”.

As previously reported in the Kremlin, during the meeting of leaders of Russia, Germany, France and Ukraine will discuss a “whole range of issues related to the implementation of the Minsk agreements” and will be the key issues of political reform in Ukraine and the elections in the Donbass.

According to the program posted on the website of the UN, Lavrov’s statement on the global summit on development scheduled for the end of the morning session (local time). According to the foreign Ministry, the Minister in his speech will reiterate the readiness of Moscow “to actively contribute to the effective implementation of the priorities” the global agenda.

“We are going to consistently boost cooperation with organizations of the UN development system, including operational programmes and funds. Inexpedient “ranking” of sustainable development objectives according to their degree of priority. In accordance with the earlier achieved in the UN General Assembly arrangements the main objective in the new agenda we believe the eradication of poverty in all its forms and manifestations”, — said the Russian foreign Ministry.

The Russian side has consistently opposed “review of the principles of humanitarian response”, said the Agency. It is expected that the Minister will talk about the moves to promote long-term humanitarian financing.

In addition to speaking at the summit on Sunday, Lavrov will hold a number of bilateral meetings. It is expected, including those that may be held brief talks with the foreign Minister of Estonia Marina Kaljurand. The official Tallinn has previously stated that it intends to raise during the meeting the question of the fate Kohora, however after the day before the exchange question will obviously be removed. In addition, Lavrov on Sunday to meet with President of Cyprus Nikos Anastasiadis.