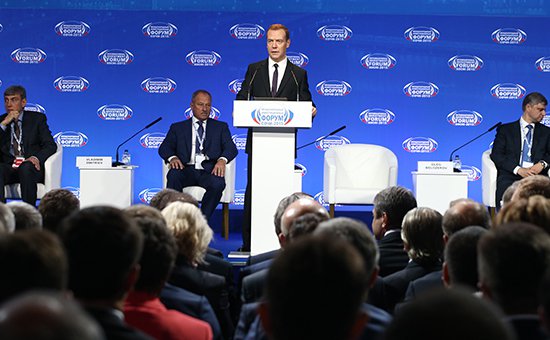 The Russian leadership knew that to accept in Moscow “political decisions” the authorities of several countries will meet political and economic pressure, and “deliberately chose this path”, said the head of the government of the Russian Federation Dmitry Medvedev at the plenary session of the investment forum “Sochi-2015”.

The attempt of this pressure, the Prime Minister has likened to a “confrontational faults” of the twentieth century, and the desire to drag them into the twenty-first century explained by a desire to limit Russia’s participation in the construction of a “new world economic order”.

“In case of external pressure the crisis has ceased to be just an ordinary crisis that we all somehow get used to it. In fact, in our eyes there’s a new reality… These changes are serious and complex, but they to scare us don’t have — in them lie great opportunities for development”, — said Medvedev.

The head of government emphasized that the evolving economic and social “features” will determine the development of the world economy in the next few decades, and Russia is obliged to capitalize on emerging opportunities.

“The world has not yet accepted the new technological order, many untapped markets that are just emerging, and it is very important right now to engage in this process. Russia should once and for all to abandon the “catch-up” development model. It is not enough to simply follow survival strategies — in this case, we will fall behind, and this time hopelessly,” warned the Prime Minister.

The key areas in which reforms should be undertaken, Medvedev took the expansion of investment activity, the intensification of import substitution, improving the quality of public administration optimization and fiscal policy. The Prime Minister once again urged “as soon as possible” to reorient the economy “commodity positions to other points of growth”.

“We should not just passively wait out this “ice age of oil”, this oil pause. And even when oil prices recover (and this is no doubt due to understandable cyclical reasons), they should not be the main source of replenishment of the budget”, — explained Medvedev.

According to the Prime Minister, in response to external economic pressure the Russian authorities should expand the space of economic freedom. “In fact, this is the basis of a new model of economic growth”, — said Medvedev.

The head of government stressed that the contacts between entrepreneurs and business interests ultimately bind States stronger than any policy.