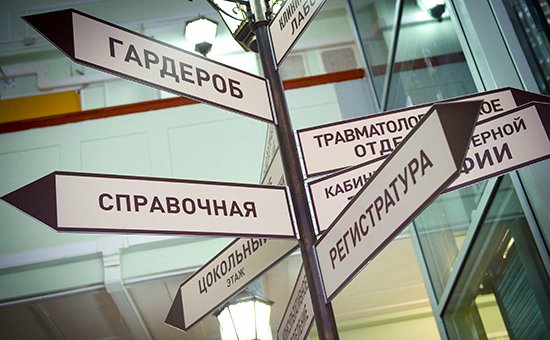 Orders of the Directorate of the Moscow Department of health, on improving the efficiency of clinics and hospitals, available on the procurement website. The cost of the lots is 49, 44 and 47 million rubles respectively. All tasks relate to the implementation of the program “Capital health care”.

In tender documents it comes to the development of methods of financial incentives, tariff changes, introduction of new systems of patient management, the organization of the situation centre for monitoring and information analysis. All three involve the prompt execution within 45 days of the conclusion of contracts.

The program “Development of health care in Moscow (Capital health)” was launched in 2012 and will continue until 2020. We are now implementing its first phase (will last until the end of next year). Total funding for the program should be 3,539 billion rubles.

This program involves the optimization of the network of medical institutions of Moscow. Last autumn it became known that in the optimization of city government is conducting a massive reduction of hospitals and doctors. In 2014 in Moscow was fired over 9.5 thousand physicians. In the current year reductions continued: data from Federal statistics on the first six months that the total number of health workers compared with 2014 fell in Moscow by 16.6 thousand

For “optimization” Moscow hospitals, the city government also ordered consulting services. The representative of the Department of health to the question , what are the new orders for the provision of such services, said that “structural change” in the capital health in General is completed, but “improving the system of the Moscow medicine involves the implementation of a set of large-scale programs and projects”. To involve independent experts demanded the public representatives, he said: the aim of further work — improving the availability and quality of clinics and efficiency of employees.

Connecting independent analysts need to “quickly implement numerous proposals of Muscovites” to improve the performance of Metropolitan polyclinics, said in a written reply by the representative of the Department of health on request . There it is specified that the consultants need to analyse the effectiveness of those activities.

Such a need is not obvious, the reason is that the Director of the Institute of health Economics HSE Larisa Popovich. In one of the lots we are talking about the analysis of the information collected, she says. “We just need to summarize what crowdsourcing collected from the entire population of Moscow. Why is the Department itself can’t do it and why it’s worth the money?” — asks the expert.

In General, the orders are always opaque, and some of the requirements of the Department clearly sharpened by foreign companies, as suggested by the applicants have international experience of work, says Popovich. “From the start it cuts off many Russian companies. But why did the Department experience any implementations? — Successful Russian experience”, — the expert believes.

Last fall, Vice-mayor Leonid Pechatnikov confirmed that the optimization of Moscow’s healthcare system was based on the studies of the expert groups, but did not elaborate on what dimensions it is. Great analytical work for the Moscow government held an international consulting firm McKinsey&Company, said a senior town hall official and was confirmed by a source close to the company. The cooperation of Moscow authorities with McKinsey is not reported for political reasons, said a source at city hall.

To assess the adequacy of the cost of the works specified in the orders of the Department of health, it is difficult, given the vague requirements, says Popovich. But almost simultaneously on the website of the procurement placed a similar order from the Ministry of health, said the expert. The Ministry is seeking a contractor to conduct analytical work on the provision of medicines. “This large study with a deep analysis of international experience and regional systems, but its cost is only 1.5 million rubles. Why such a difference?” — she is surprised.

The calculation of the initial price of the contract based on the documents posted on the website of the procurement relies on a large number of performers: in one of the projects will involve participation of 308 people with a salary 159 500 RUB. per month each. Above the other will work 276 people with the same level of payment. The third calculated from the complexity “295,3 person-months” worth 135 200 rubles. per unit.

Orders of the Department of health raised doubts among experts project the popular front “For fair procurement”. “These services are very lengthy, costly and very compressed in terms of performance: within 45 calendar days must be developed more than 140 million rubles of budgetary funds”, — says project Manager Anton Guetta. It is not clear why in the initial price of the contracts included the costs of leasing or amortization of its own premises, equipment and furniture, maintenance of administrative staff, purchase of databases, literature, communications costs and even depreciation of table lamps, he enumerates. In “Honest purchases” after you request a take data for the procurement Department in the study, promised Guetta.

The representative of the Department of health notes that when placing procurement ensure the maximum openness and transparency, “has complied with all necessary procedures, including the examination of pictures”.

The Department has its own intelligence, but they are busy working, reported the representative of the Department.

Spring wrote that the Moscow city government has invited 50 employees in the newly created laboratory of data analysis EMIAS (unified medical information and analytical system of Moscow). Each analyst was offered a salary 100 to 150 thousand roubles a month. Competitive selection as a result were 28 employees, said the representative of the Department of health. As the information on the website of the laboratory, this autumn we can expect a new set. Currently teams of analysts engaged in detailed study of data collected by the SYSTEM, including analysis of seasonality of demand for medical services, the formation of ratings of clinics, the analysis of their work and others.