It is expected that Russian and American leaders will discuss the development of bilateral relations on the subject of Syrian and other international issues, including the situation in Ukraine. 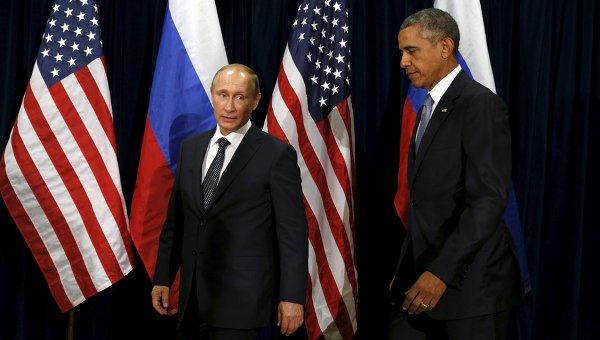 NEW YORK, 29 Sep. The presidents of Russia and USA Vladimir Putin and Barack Obama hold on the sidelines of the UN General Assembly first in the last two years a bilateral meeting.

A meeting of leaders of two world powers is taking place behind closed doors.

Opening the meeting, the presidents of Russia and USA in the presence of journalists not said a word. Together they went out into the hall, where they waited for members of the press, shook hands and went into the room where the conversation began. The journalists tried to shout questions, but the two leaders left them unanswered.

Earlier, the Kremlin and the White house said that in addition to the development of bilateral relations, the presidents will discuss the Syrian topic and other international issues, including the situation in Ukraine.

Speaking at the site of the UNGA, Putin paid special attention to the fight against terrorism. He expressed hope that the agreement on the fight against terrorism with partners, including the United States. On Monday, UN Secretary General ban Ki-moon ahead of the meeting between the two leaders expressed hope for a positive result of the meeting between Putin and Obama. He expects that the parties will show the same resilience and solidarity, as at the conclusion of the Iranian nuclear deal.

In addition, at the beginning of September 2015, the U.S. government announced sanctions against several companies in connection with violations of the law on the non-proliferation of nuclear weapons against Iran, North Korea and Syria. The black list included the Tula instrument design Bureau, the company “Katod”, NPO Mashinostroyenia, MiG, Rosoboronexport.