The President of Russia Vladimir Putin stated that Luxembourg is a major investor in the Russian economy and according to the head of the state, accumulated investments amount to around $ 40 billion, while Russian 12 billion. 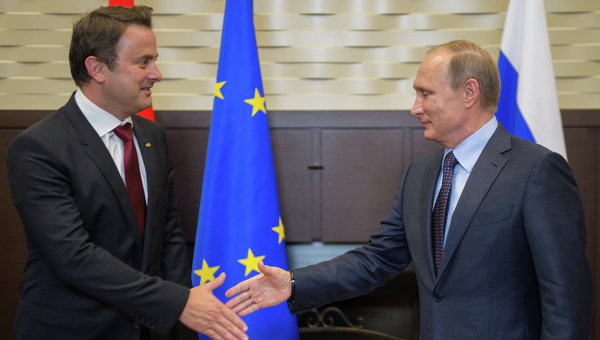 SOCHI, 6 Oct. The President of Russia Vladimir Putin at a meeting with Prime Minister of Luxembourg Xavier Bettel in Sochi on Tuesday expressed the intention to discuss the visit to Russia of the Duke of that state, which is scheduled for next year.

“Hopefully we’ll be able to talk about the state visit of the head of state of Luxembourg. In my opinion, we’ve been planning this for the next year, at the beginning,” Putin said.

Speaking about bilateral relations, Putin noted that there has been some decline in trade and economic relations. “Luxembourg is a major investor in the Russian economy”, — said the President. According to the head of the state, accumulated investments amount to around $ 40 billion, while Russian 12 billion.

“Very glad to see you, welcome,” he said, adding that the last short meeting took place in Normandy.

In turn, Prime Minister of Luxembourg stated that the Duke’s visit to Russia is being worked out. “The state visit, which you’re definitely prepared,” he said.

In addition, he believes that after talks “Norman Quartet” on Ukraine “there is hope”. “I closely followed the “round table” which was in the “Normandy format”, and we have hope,” said Bettel.

He also expressed a position on fighting ISIS in Syria. “I think the moment in which we now meet, is very important… the world is experiencing a conflict situation. We now have events that occur in Syria, we have a crisis, we have a common enemy, and we have a common goal — the fight against terrorism,” he said. He added that he had heard Putin’s speech at the UN General Assembly.