Silvio Berlusconi arrived in the Crimea with a private visit. The President of Russia met him at the memorial dedicated to the memory of those killed in the Crimean war the soldiers of the Kingdom of Sardinia. 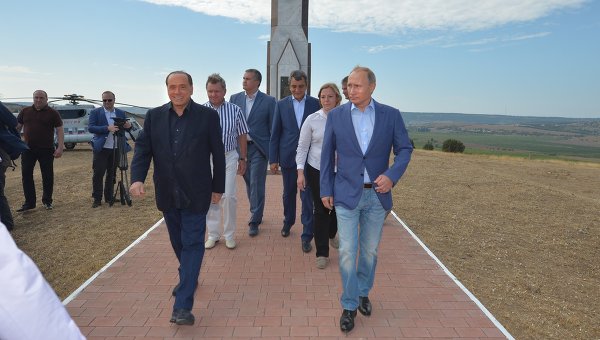 SEVASTOPOL, 11 Sep. The President of Russia Vladimir Putin in Crimea met with former Prime Minister Silvio Berlusconi at the memorial dedicated to the memory of those killed in the Crimean war the Sardinian soldiers of the Kingdom, near mount Gasfort.

In 1882 the Italians chose the mountain for a cemetery and the reburial of his countrymen. On its top was built the chapel of Balaklava marble-like limestone. Under the chapel is a crypt, in which were a few steps. Near the chapel there was a well. The necropolis was surrounded by a stone wall. Contained cemetery with funds of the Italian government, under the supervision of a Consul, who came from Odessa.

During the second defense of Sevastopol took place on the mountain of the advanced defensive line, several times the height passed from hand to hand. The cemetery and chapel were destroyed, their remnants were dismantled in the late 50-ies. The location of the necropolis today can be defined visually by thickets of cactus-the prickly pear, introduced from Italy in the 19th century. Of the tombstones there is only one plate.

In September 2004 at the foot of mount Gasfort near the highway Yalta-Sevastopol was built a memorial dedicated to the memory of those killed in the Crimean war the soldiers of the Kingdom of Sardinia.

Earlier, Putin said that for many years of collaboration with Berlusconi he has good, friendly relations. In late June, Berlusconi visited Putin on a private visit to the Altai, they met on 11 June during the visit of the Russian President to Italy.

Berlusconi — one of the few European politicians who fully supported the position of Russia on the Ukrainian crisis. Action of Western diplomacy towards Russia after the Crimea he described then as a “reckless and far from constructive spirit”. In addition, the veteran Italian politicians criticized the decision to suspend the meeting in the format of “Big eight” with Russia, calling it “anti-historical and counterproductive.”

Berlusconi’s home, according to recent polls, is in seventh place with 27% rating of personal popularity.