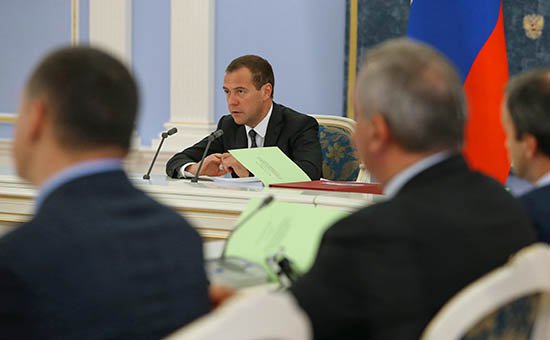 Wednesday, October 7, after several months of discussions, the government finally came clear, what kind of budget the state will take in 2016. As expected, the budget crisis and includes a number of unpopular measures, which were approved at meetings held by Prime Minister Dmitry Medvedev and social Deputy Prime Minister Olga Golodets on Wednesday.

The draft budget for 2016 is “very difficult, hard, as they say, and reflects the current economic situation in the country,” warned Dmitry Medvedev on Wednesday at a meeting with the leadership of “United Russia”. The budget forecast a deficit of 2.8% of GDP (less than 3%, as requested by President Vladimir Putin) based on the estimation of growth of 0.7% in 2016 and inflation to 6.4% (base macroeconomic forecast). All of the most acute budget decisions, have surfaced over the last week has been confirmed: the indexation of pensions by 4%, with the possibility of doindeksatsii in the second half, extending the freeze of pension savings, preservation of export duties on oil at 2015 and an increase in met rates for Gazprom. On Thursday the draft budget will be considered at the government meeting, which is likely to be approved. Until October 25, it needs to be submitted to the state Duma.

The forecast deficit of 2.18 trillion rubles proposed to be funded mainly at the expense of means of Reserve Fund will be used to 1.96 trillion rubles reserves. The contingency Fund so in 2016 will be reduced from 3,38 trillion to 1.25 trillion rubles, or 1.6% of GDP (compared to 4.6% of GDP at end-2015). Thus in materials of the Ministry of Finance (got) specifies that provided the opportunity to withdraw from the Reserve Fund to 500 billion rubles, if budget revenues do not meet expectations.

Medvedev and increase of pensions

6 October, the Chairman of the Duma Committee for labor and social policy Olga batalina said that the October 7 meeting with Prime Minister Dmitry Medvedev the representatives of the parliamentary faction “United Russia” will criticize the Finance Ministry’s proposals to index pensions in 2016 just 4%. According to Batalina, to limit the indexation of such value is impossible. Will need to increase pensions in the second half of 2016 based on the level of actual inflation.

During the meeting, which was held in the Prime Minister’s residence in Gorki, Medvedev agreed that in the second half of 2016, will need to be doindeksatsii pensions. However, he did not specify the amount of potential doindeksatsii. “No one knows how the economy works in the first half of 2016,” — said the Prime Minister. United Russia also did not mention any specific numbers.

Medvedev has supported other social initiatives of United Russia. In particular, he agreed that it is possible to abandon the indexation of pensions to working pensioners, and also to differentiate the fee for major repairs depending on the age of occupants (enter the reduction factor for people over 60, and people over 80 years old to be exempt from card in full).

When I discussed the idea of the government to completely abandon the payment of pensions to working pensioners, the representatives of United Russia were criticized. According to Batalina, this measure would have led to the emergence of fraudulent schemes. Moreover, the head of the Duma Committee has compared this proposal with the dispossession of the 1930-ies.

The head of Fund “Petersburg politics” Mikhail Vinogradov, commenting on the social initiative of United Russia, said that the idea of doindeksatsii of pensions in the second half is an attempt to ease the stress of inadequate indexing in the early years. “This compromise very handy to the Duma elections of 2016”, — said Vinogradov.

Budget reserves for the next year will amount to more than 1.1 trillion rubles and will exceed the dimensions established in previous years of this kind of “secret stash”. Actually it is about the five reserve funds in the membership budget. Earlier sources reported only about two such reserves. First of all, in a separate reserve allocated 342,2 billion rubles, which will appear in the result of the extension of the moratorium on contributions to the savings pension. From materials of the Ministry of Finance that these funds will be controlled directly by President Vladimir Putin. Money from this Fund can only be accessed “in accordance with the instructions of the President”.

Two of the Fund also managed by the government. One proposed to establish in the amount of 120 billion rubles. Source — reallocation during the year reserved costs. Another Fund can be up to 150 billion rubles and will be based on the unencumbered balances of budget funds of budget beneficiaries. The means of these two funds will be mainly used for similar purposes — additional support for sectors of the economy, social support and humanitarian assistance to the people of foreign countries. What it States in the materials of the Ministry of Finance did not specify, but this year, Russian humanitarian aid was sent to Ukraine and Syria.

Finally, the size of the fifth reserve in the materials is not specified. It will be filled due to the return of subsidies to state-owned companies, provided in 2015. Money from state-owned companies will pick up “in connection with the failure of performance of gozzadini”. The purpose of the expenditure of the Fund should additional support industries, social support and humanitarian assistance to the people of foreign countries. Prior to this, sources in the government hinted that the indexation rate of pensions during the second half may be produced through one of these funds. However, materials of the Ministry of Finance is not right.

$50/bbl. pledged as the price of oil in the budget parameters

2.2 trillion rubles will reach the budget deficit. Of these, 1.97 trillion to Finance at the expense of means of Reserve Fund and national welfare Fund, the rest from other sources

Source: draft Federal budget for 2016, the materials of the Ministry of Finance

Pensions were underfunded, in a way

Insurance pensions will be indexed from 1 February 2016 only 4% and not 12.2% (forecast inflation at the end of the current year) as required by applicable law and as demanded by the social unit headed by Olga Golodets. Earlier Finance Minister Anton Siluanov estimated each percentage point increase of 70 billion rubles of budgetary expenditures, i.e. to incomplete indexation, the budget will save about 570 billion rubles At the same time, the government provided the possibility of doindeksatsii insurance pensions in the second half 2016, but this will depend on economic conditions and budget execution in the first half. Dmitry Medvedev gave to understand that the pensions, if the economic circumstances are condensirovanniye in full, in actual inflation. “We have in the presence of economic reasons to carry out a comprehensive indexation. Thus, the indexing can be divided into two parts,” he said.

If in the part of indexation of insurance pensions, the Ministry of Finance achieved the desired result (at first, in the summer, he proposed indexation of 5.5%, and in September cut the bar up to 4%), cumulative component of the pension office Anton Siluanov lost pension savings will again freeze. The Finance Ministry was categorically against the extension of the moratorium on contributions to the pension, arguing that pension savings is an important investment resource. But in the end, the draft budget includes the freeze of pension savings on 342,2 bn, confirmed to TASS the Deputy Minister of Finance Alexey Lavrov.

The modest 4% will be indexed not only insurance pensions, but the payments according to the law on state pensions (166-FZ), military and security officials, war veterans, citizens affected by technological disasters, people with disabilities. However, Federal civil servants, which are also protected 166-FZ, indexed pension in 2016 will not be like their salaries and monetary allowances of the military. 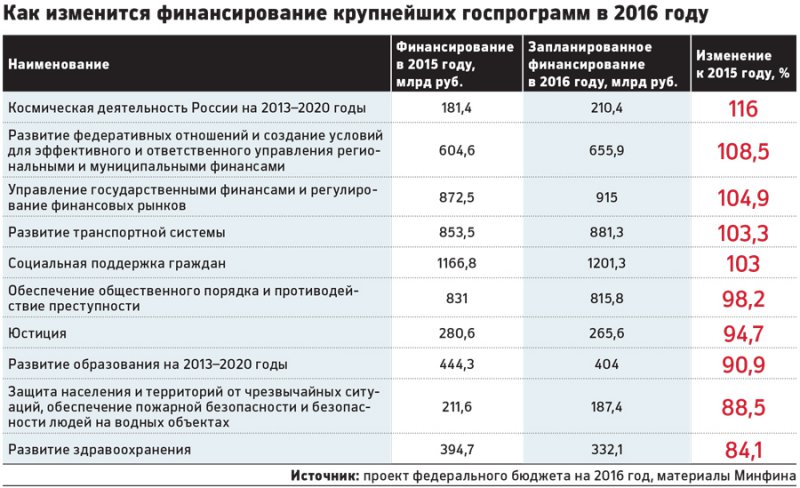 In submitted to the Cabinet meeting on Thursday budget projections continue to reflect proposals of the Ministry of Finance on the preservation of export duties on oil in the amount of 42%, as in 2015. Tax reform, approved by the government last year, called for the reduction of this duty. Another solution, which insists the Ministry of Finance, the increase in met rates for oil, gas and gas condensate to Gazprom. These two measures will give the budget 297,6 billion roubles, is spoken in materials of the Ministry of Finance. During the budget debate on Wednesday a final decision on these issues was not announced.

But materials are missing, the proposal to introduce excise taxes on 7 million tons of middle distillate. The additional revenues expected at the level of RUB 30 billion In funds to balance the budget the Ministry of Finance suggests several innovations. So, in 2016 the utilization fee on cars for the first time since 2012 can be increased to a maximum value of 65%. Before that, indexing was discussed 30% to 60%. In materials of the Ministry of Finance reported that the indexing of the collection will attract in the budget to 39.3 billion roubles dopdohodov. On some issues, the debate will clearly continue at a government meeting on Thursday. For example, at the meeting with “United Russia” Dmitry Medvedev agreed not to reduce the spending on agriculture. And materials for the meeting of the government agrarian program is reduced by almost 27% compared to 2015. More impressive reduction is planned only for the state programs of development of the aviation industry (-35%) and the development of the nuclear power industry (-47,8%). At a government meeting on Thursday at the ministries and agencies will be the last opportunity to defend the industry costs.