Protracted negotiations of the Russian and American leaders on the sidelines of the UN General Assembly did not produce a breakthrough in solving acute regional problems, but recorded the resumption of dialogue at the highest level. 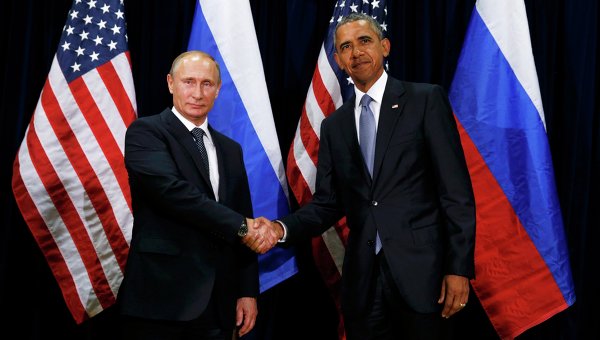 UN, 29 Sep. The presidents of Russia and USA Vladimir Putin and Barack Obama held the first Monday evening for the last two years a bilateral meeting, during which discussed the conflicts in Syria and Ukraine.

Following the meeting, Putin answered journalists ‘ questions and said that Russia would continue to help Syrian President Bashar al-Assad in the fight against “Islamic state”, but will not participate in ground military operations against the extremists; Russian and American military will establish a dialogue to avoid conflicts in Syria; and the U.S. role in resolving the conflict in Ukraine is quite active, because they “stand behind”Kiev.

The conversation, which took place on the sidelines of the UN General Assembly in new York, lasted one and a half hours instead of the planned 50 minutes. The protracted negotiations did not produce a breakthrough in solving acute regional problems, but recorded the resumption of dialogue at the highest level.

To whom and how to help in the fight against IG

Putin after the meeting responded to the main issue of concern to countries interested in resolving the conflict in Syria and in the fight against ISIS — will Russia send troops for ground operations against terrorists.

“We believe that the fight against terror must go hand in hand with the processes of a political nature in Syria, but no participation of Russian military units in ground operations speech does not go and can not go”, — said the President of Russia.

“As for our participation, we are thinking about it. Don’t rule anything out, but if we act in full compliance with international law”, — added the head of state and explained that these are decisions of the UN and requests the Syrian side.

Thus Putin has reminded that from this point of view the military operations of the USA and its allies in Syria illegal. To help, he said, must be “those in the field, that is, resists and fights with the terrorists, including ISIS” in Syria is first and foremost the Syrian army units and Kurdish militias, he said.

Thus the President, on the one hand, outlined the intentions of Russia, which until recently “remained unclear” for the U.S. and its allies and caused them concern, and on the other hand noted the linkage between the fight against terrorism and political settlement. The latter almost word for word coincides with the position of Washington, which can be regarded as a “shared vision” of the situation, even despite the difference in approaches to the fate of Assad.

Who is to decide Assad’s fate

The White house confirmed that now the intentions of Moscow in Syria is clear: the fight against ISIS and support of the government, i.e. Assad. And if Washington is perceived as “okay”, the second in the negative. To bring closer the positions during the talks, presidents, apparently, failed.

“I have great respect for my colleagues and to the American President, and to the French, but they, as far as I know and it seems to me, are not citizens of the Syrian Republic, therefore, should not participate in determining the fate of the leadership of another state. It’s still the case for the Syrians themselves,” — said Putin.

“The conflict (in Syria) deep and, unfortunately, bloody, so I said, along with the support of the official authorities in the fight against terror we will insist on conducting a parallel political transformation and the political process. As far as I know, President Assad agrees,” added the Russian leader.

How to avoid “friendly fire”

Speaking of comparing Islamic state terrorists with the Nazis, the Russian leader noted that it is quite justified considering the atrocities they do. “And I would really like to understand this, we combined as many countries as possible in combating this menace,” he added.

For such purposes, he recalled, Russia, Syria, Iran and Iraq established the coordinating center, which will collect the information necessary to combat extremists. “I mean, of course, not a unified command and fighting under the authority of this command, but at least coordination of work”, — said the head of state.

“It is open to joined by all who are interested in the fight against terrorism. We are now talking about the interaction of the USA and Russia on the antiterrorist track. We have an understanding that we need to strengthen our work at least on a bilateral basis. Now we will think together on the creation of appropriate mechanisms,” he said.

The President added that similar exercises will be conducted with Israel, to the interests which Moscow treats with respect, but without creating special structures. Among other countries in the region that could participate in such work, Putin called Saudi Arabia, Turkey and Jordan.

Later, the White house told reporters that Obama and Putin agreed to send its military to conduct negotiations, to avoid conflicts during potential operations in Syria. In a combat zone such conflicts often end in “friendly fire”, which suffered U.S. allies in Iraq and Syria.

At the same time the representative of the US administration following the talks skeptical remarks about the initiative of creating a coordination centre between Moscow, Tehran, Damascus and Baghdad, making it clear that Russia, Iran and Syria and so over the years shared intelligence, and about the situation in Iraq, Russians have little information.

Who is behind Kiev

Initially, the White house stressed that in the first place, Obama plans to discuss with Putin the situation in Ukraine and implementation of Minsk agreements on the settlement in Donbass. But even before negotiations, it became clear that the main topic will be Syria taking into account the difficult situation and the crisis of refugees from that country. In the end, even on the podium of the UN General Assembly, Obama gave Ukraine only about two minutes from his 42-minute speech.

For an hour and a half conversation of presidents of Russia and USA, according to the White house, Ukraine was dedicated to half-time. However, based on its results the representative of the US administration reported only a few common phrases: Washington, still, for the territorial integrity of Ukraine, and expresses “concern about the implementation of the Minsk agreement on Ukraine, including the plans of separatists to hold local elections”. While Obama believes that there is a “positive opportunity” to implement the Minsk agreements in the coming months.

Putin has limited himself to the explanation of why we generally discussed the Ukrainian settlement with Obama.

“As for the possibility of a more active US involvement in resolving the conflict in Ukraine, USA and so actively involved in it, although it is not highlighted, as the work of Russia, France and Germany in the “Normandy format”. However, the US to a degree are behind the Kiev authorities, they are in constant contact with Europeans, but between Russia and the USA have established good business contact the foreign Ministry and the state Department on a permanent basis. Today’s consultation showed that our American colleagues in the material entirely, and, of course, affect this process”, — said the head of state.

Journalists also asked Putin to comment on the behavior of the President of Ukraine Petro Poroshenko, who shortly before the speech of the Russian leader out of the hall, where the UN General Assembly. “I didn’t notice that the Ukrainian President was not present at my speech. I, in principle, was not very important to present all, without exception. Especially those who are uninteresting, and should not be present there”, — said Putin.

Finished the subject of Ukraine, the President’s response to the question about the anti-Russian sanctions and isolation of Russia, which recently said Obama on Monday admitted that the US does not want this. “We have said from the outset that the policy of sanctions, isolation is generally ineffective in the modern world and its goals usually are not achieved. In respect of such country as Russia, it is simply impossible. Enough to at least look at a map”, he said.

“Secret meanings” and opportunities for dialogue

In General, summing up the first two years, bilateral meetings with Obama, Putin called it “constructive, business, surprisingly, very candid”. He also stated that there were found common ground, but differences remain. “They (differences) are in principle known, there is no need to repeat them. But, in my opinion, there is an opportunity to work on common problems together”, — said the Russian leader.

Meanwhile, Putin noted that although this was the first full meeting in two years, all the while with Obama they met on international exchanges and talked on the phone.

The White house also described the meeting as productive and noted that, for example, on the issue of Syria, none of the leaders “tried to earn points” and was “a General desire to understand the way to approach the situation”.

The media, meanwhile, tried to clarify the “secret meaning” of contacts between the two presidents during the day. So, the journalist was interested in the UN common photograph of Putin and Obama raise their glasses, and ban Ki-moon, who had to sit between them, was absent — supposedly in order to give the two presidents to talk.

“Nothing, it’s nothing to it, this is a Protocol event and nothing more. Here is the conversation that took place, was, indeed, I said, constructive, thorough and, in my opinion, very open,” said Putin and explained that ban Ki-moon was giving a toast from the podium.