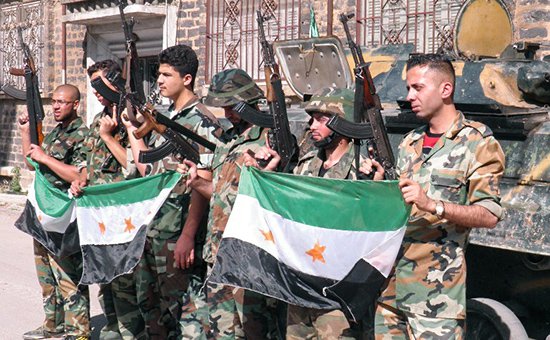 The leader of the rebel group the free Syrian army, Bashar al-zu’bi called illogical proposal to combine the efforts of groups and government forces in the fight against “Islamic state”.

Earlier Tuesday, President Vladimir Putin announced the proposal of the head of France Francois Hollande to unite the efforts of government forces of Bashar al-Assad and the Free Syrian army in the fight against ISIS. Putin said in an interview with the head of the defense Ministry Sergei Shoigu that supports this idea and instructed the war Department to support “their own partner channels.”

Meanwhile, a source close to Hollande told Reuters that the idea of uniting the efforts of Assad forces with the opposition does not belong to France. According to the source, Hollande spoke with Putin “only about the need to involve the Syrian opposition to the negotiating table”.

Earlier this week, Syrian opposition groups including the Free Syrian army, urged countries in the region to form an Alliance to fight against “Russian-Iranian occupation of Syria”. Earlier the representative of one of the Syrian rebel factions Mustafa Maarati stated that Russia “wants to win the Free Syrian army.”

The Russian aviation group began bombing is positions in Syria on 30 September. On the first day of raids, the representative of the Free Syrian army, Jamil al-Saleh said that Russian bombers attacked not the position of IG, namely the headquarters of the group in Hama province.

On the morning of 7 October, the Prime Minister of Turkey Ahmet Davutoglu said that only two of the 57 air strikes, which the Russian aircraft attacked the Syrian territory struck the goal of the IG. Other impacts, according to the Turkish Prime Minister, were directed against the Syrian moderate opposition. In the Kremlin informed that the Russian planes bomb positions of the Syrian opposition, not the militants, denied several times.