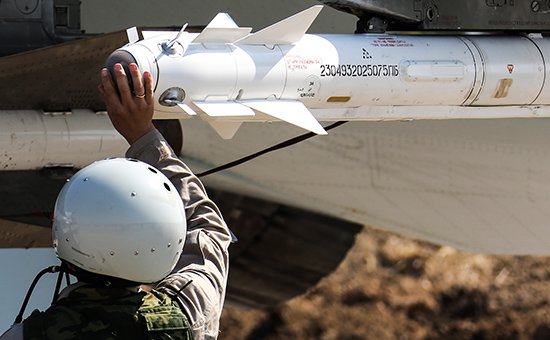 As a result of bombing by Russian planes in Syria have been destroyed the main warehouse of weapons of the CIA-trained rebel group “Liwa suqur the al-Jabal”. Reuters said the commander of the group, Hassan Haj Ali, with whom the Agency communicated via the Internet.

According to Ali, the main ammunition stores of the group were in Aleppo province and were almost completely destroyed during the airstrike on Tuesday night. Ali added that this is the second time position group was subjected to air strikes by Russian aircraft.

Fighters of “Sukur Liwa al-Jabal” training organised by the CIA in Saudi Arabia and Qatar, writes Reuters. In the US, the group is considered to be the moderate Syrian opposition and acts on the territories of Western Syria, in areas that are being bombarded by Russian Air and space forces (VKS). States that oppose the regime of current President Bashar al-Assad, had previously provided the grouping of antitank guided missiles.

According to the leader of “Liwaa suqur the al-Jabal”, the group is struggling with the militants “Islamic state”. According to Ali, on Tuesday, ISIS fighters attacked the group, placing a bomb in a car on one of its bases.

That Russian planes during the bombing struck blows to positions of the CIA supported rebels, last week The Wall Street Journal reported sources in the American administration. They told the publication that one of the territories that was attacked by the Russian force, was the rebels who receive funding and weapons, as well as trained specialists of the CIA and their counterparts from allied Nations. According to the WSJ, the CIA conducts secret program of weapons and training Syrian rebels since 2013 to fight the regime of Bashar al-Assad.

After the media have repeatedly stated that Russian military aircraft strike not by militants (prohibited organisation in Russia), and Syrian rebels.

In Moscow these messages repeatedly denied. In the daily reports of the Ministry of defense among the targets of attacks by Russian aircraft specified exclusively the positions of the militants of the IG. The President’s press Secretary Dmitry Peskov said that information about the attacks of the Russian space forces for the moderate opposition in Syria “imposed from the outside”. According to him, data offered the Russian defense Ministry are “exhaustive”.