Six trucks with plant products that have followed in the Crimea from Ukraine, despite the blockade, had no documents, reports Rosselkhoznadzor. All products were returned to Ukraine. 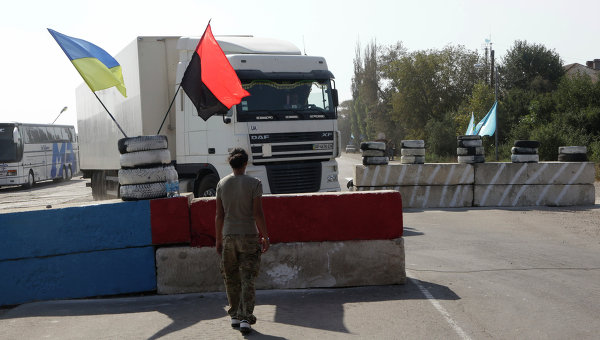 SIMFEROPOL, 5 Oct. Inspectors of the Rosselkhoznadzor administration for the Crimea and Sevastopol a week deployed on the Ukraine, all six trucks with plant products without documents, which tried to import into the Crimea in the conditions of the food blockade of the Peninsula, the Agency reports.

Activists of the banned in Russia as extremist movement “Right sector” and other Ukrainian organizations on 20 September blocked the delivery of goods to the Crimea. Statement of intent to block the border with the Crimea did earlier deputies of the Verkhovna Rada Refat Chubarov and Mustafa Dzhemilev. The Kiev authorities do not prevent so-called blockade of the Peninsula. The authorities of the Russian Republic considered this action as senseless.

The Rosselkhoznadzor reports that over the past week on road crossings were inspected six transport units and controlled by 19.2 tonnes and 500 units of products of plant origin, EN route to the Crimea from Ukraine. As specialists have found out that all of these products had no necessary documents certifying its safety.

“On the basis of approved importers of violations of norms and requirements of current legislation of the Russian Federation the goods have not received permission to import. The decision of the management of all regulated products was returned to the territory of neighboring States”, — said the Rosselkhoznadzor.

Attempts to import in Crimea of products of plant and animal origin without documentation of its security are continuing, said the Agency, adding that usually such products are trying to hide behind the legitimate cargo.

Earlier Crimean border guards detained two trucks with 40 tons of smuggled alcohol from Ukraine, who freely crossed the border from the Ukrainian side, despite the previously announced food blockade of the Peninsula, reported the Crimean border Department of the FSB of Russia.