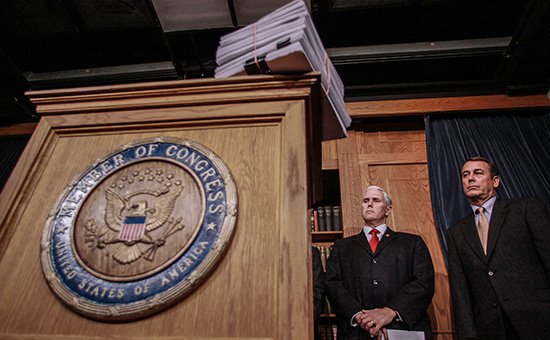 The U.S. Senate (the upper chamber of Congress) by an overwhelming majority on Wednesday approved the military budget, reports Reuters. The total amount of funds allocated for military purposes is $612 billion.

Among other things the bill provides for the resolution on rendering assistance to Ukraine in the form of lethal weapons, said the TV channel Foxnews. The document does not directly obliged to provide military assistance to Ukraine, but allows the head of the Pentagon to use this right.

In addition, the document allows to use $600 million to Finance the program of training of fighters of the moderate Syrian opposition. However, in this case the Minister of defence will need to obtain additional approval from Congress every time he intends to spend funds for these purposes. Another $715 million permitted to be spent on assistance to the Iraqi forces in the fight against “Islamic state”.

The draft law on military budget also imposes a ban on cruel interrogation techniques, prohibits the U.S. administration to transfer detainees from Guantanamo Bay to prisons within the United States, military pensions increases and spending large sums on cyber warfare.

The probability that U.S. President Barack Obama will veto the bill. Amendments make it impossible for Obama’s promise to withdraw from guantánamo of the last prisoners and close the prison, emphasizes Reuters.

With regard to military assistance to Ukraine, the U.S. and before it is rendered, but non-lethal weapons. In early October Petro Poroshenko told about the plans of the USA to transfer to the new models Kiev defensive weapons.

Discussions about the supply of lethal weapons being carried out in USA for months. The part of the military and congressmen — members of the Republican party — have advocated that Barack Obama needs to take a harder line and start to supply lethal weapons to Ukraine. The US President had previously opposed the initiative, considering it a last resort.