The Deputy foreign Minister Igor Morgulov and his counterpart Shinsuke Sugiyama at the meeting to discuss the problem of concluding a peace Treaty and other aspects of bilateral relations. 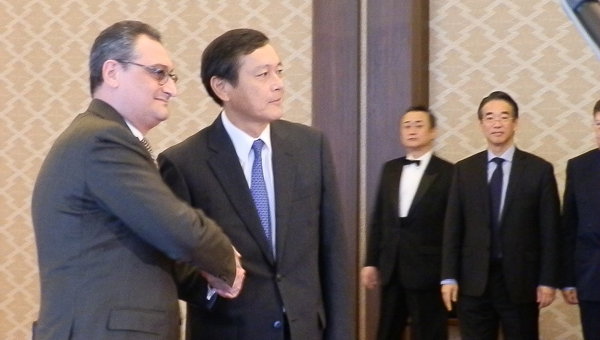 It is expected that the Deputy foreign Minister Igor Morgulov and his colleague Shinsuke Sugiyama will discuss issues related to the problem of signing a peace Treaty and other aspects of bilateral relations. In addition, as reported by the broadcaster NHK, negotiations diplomats will try to find ways to implement the Russian President’s visit to Japan until the end of this year.

Putin’s visit to Tokyo was scheduled for the fall of 2014, but did not take place due to the complications of the international situation in connection with crisis in Ukraine. The timing of the visit has been rescheduled for the current year, however specific dates have not yet named. The intention to conduct the visit before the end of this year was confirmed by the leaders of the two countries at their meeting on the sidelines of the UN General Assembly in late September.

Previous the first round of negotiations on the conclusion of a peace Treaty took place in January 2014. On conducting the second round agreed the foreign Ministers of the two countries during the visit to Russia of Minister of foreign Affairs of Japan by Fumio Kishida at the end of September.

In the past September 21, negotiations with Minister Fumio Kishida Sergei Lavrov confirmed that the promotion “in this issue”, possible only after the recognition of Japan’s postwar historical realities, including the UN Charter in its entirety.