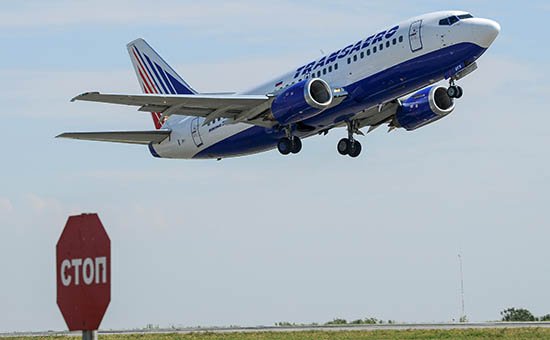 managed to find the list of debts of airline “Transaero” banks, which was prepared for the meeting in the government. Figures confirmed by sources close to these banks. In accordance with the list of the largest loan issued by VTB at RUB 12.7 billion, followed by Gazprombank and Novikombank, the debt to which is at 8 billion rubles At 7.5 billion rubles. “Transaero” should Promsvyazbank and the Moscow credit Bank, by 6 billion rubles from Sberbank and Rosselkhozbank.

In this case Sberbank credit reserved is 100%, said a top Manager of the state Bank. The head of VTB Andrey Kostin said earlier that the loan under state guarantees, which cover it 90%. Others banks reserves less. For example, Promsvyazbank’s loan is reserved by 30%, said earlier a source close to the Bank. The ICD — 20%.

And for example, the Bank’s reserves are not created at all, said the source familiar with the statements of the Bank on 1 September. The loan is denominated in foreign currency.

Because of the agreements between Aeroflot, creditors and lessors at the meeting in the government could not be reached, in case of bankruptcy of the company under these loans, banks have to a hundred percent reserve. This will be hardest hit by Novikombank, which in this case, the adequacy ratio core capital falls below the prescribed minimum of 5%, and the reserve will be 20% of the capital.

“If the ratio of core capital falls below the minimum, then the Bank cannot grant new credits until the ratio is restored, said chief of analytical Department of National rating Agency Karina Artemiev. — In addition, the restriction on acceptance of deposits”.

The aircraft will come in handy

“Aeroflot” can get about 35 aircraft from the distress of Transaero airlines, said on 7 October the head of Federal air transport Agency Alexander Neradko. According to him, other carriers can also take court Transaero from leasing companies, the official said. “They were in operation on lease, so the leasing companies are ready to transfer the aircraft in the event of termination of operating activities “Transaero” to other companies. Thus, the Park “Transaero” will be used for the carriage of passengers on domestic and international routes,” — said Neradko. The major lessors “Transaero” — “VEB-Leasing” “VTB-Leasing” and “Sberbank-Leasing”.

The head of Federal air transport Agency also noted that carriers took passengers Transaero — Aeroflot, Sibir, UTair, is not counting on the support of the budget. “This decision was made by the airline “Aeroflot” declared the other airlines, S7, UTair. I think aviation is such solidarity in this situation is present. I think the airline with the task can handle it, we certainly did not assume bad very difficult situations at airports,” — said Neradko.

“Given the small stock of first tier capital of the Bank (6.3 percent on September 1), the Bank may be restricted in the creation of additional reserves, however, the expected recapitalization in the amount of 3.6 billion rubles, should improve the situation,” Fitch analyst Anna Erachina.

According to a source close to the Bank, the standard may be violated even in the case of recapitalization 3.6 bn in October, the Bank expects shareholder (the state Corporation “rostec”). Currently the Corporation belongs to 34.04% stake in the Bank, its subsidiaries the “Rosoboronexport” is another of 23.63% in aggregate of 57.67%.

The interlocutor adds that to avoid the violation of adequacy of base capital of the Bank will be able, if will reserve credit “Transaero” at 60%, and is anticipated from Rostec recapitalization.

Currently, the Bank of Russia considers a question on granting to banks the possibility to form reserves for loans airlines on schedules agreed with the Bank of Russia, said the press service of the regulator in response to the request of the Agency TASS. Graph — a kind of privilege that allows banks to form reserves on problem loans not a lump sum, as set by the rules, but gradually.

As wrote earlier , the Central Bank plans to decide on the schedule before the end of this week. Creditors have already sent letters to the Central Bank, on request, with an indication of the size of loans, volume of reserves and description of collateral. In this case the regulator intends to make a single schedule for all creditors, regardless of the amount of their debt to the airline and the size of the already formed reserves, indicate the interlocutors . They said that the Central Bank does not want to distinguish banks that are particularly affected from bankruptcy “Transaero”.

All the banks declined to comment on the topic of “Transaero”.

The creditors, which include the IBC, “international financial club” (IFC), Absolut Bank, Novikombank, continue to fight for the salvation of “Transaero”, offering various options, for example to convert the debt into banks to forgive part of the debt or transfer the airline to the consortium of banks.