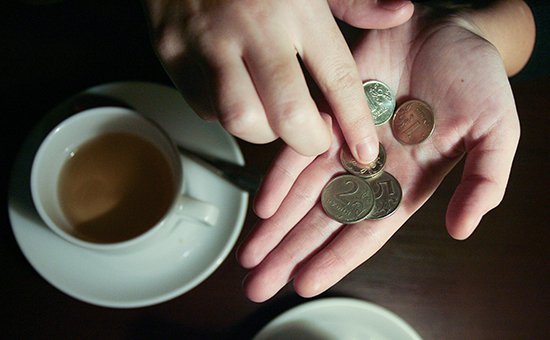 The law on bankruptcy of physical persons (No. 476-FZ), perhaps one of the most anticipated in 2015. Its been in development for 10 years, and the entry into force was postponed by almost three months, instead of 1 July, the law will take effect from 1 October. By estimations of head of Department of Federal bailiff service Alexander Kuzovkov, in the next year, the bankruptcy will try to pass about 400 thousand debtors. According to the Chairman of the “Finpotrebsoyuz” Igor Kostikova, their number will be slightly less than — 200-300 thousand people.

Total, according to United credit Bureau (OKB), the law on bankruptcy are about 580 thousand Russians — those who are no longer able to cope with the debt burden. It’s about 1.5% of the total number of borrowers with existing loans.

However, there are several reasons why the law may not benefit everyone. One of them is the main one — the price. “For some debtors, bankruptcy may be more costly than paying the debt,” warns the consultant of the Research center of private law under the President of the Russian Federation Oleg Zaitsev. The minimum amount at which the procedure will cost the debtor, 30-40 thousand rubles, maximum — slightly more than 100 thousand rubles., evaluates the Chairman of the Board of Directors of legal Bureau “Olevinsky, Buyukyan and partners” Edward Olevinsky.

The fact that the procedure of individual bankruptcy can not pass without financial or Trustee. It chooses the one who initiates the bankruptcy proceeding, the creditor or the debtor. In submitted to the arbitration court the statement he specifies the name of the self-regulatory organization (SRO), from among the members of which wants to assign the Trustee or the Manager.

In addition, the statement must be specified and the amount of remuneration. It consists of two parts. The first 2% of the sale of debtor’s property, the second fixed part. By law, she is at least 10 thousand rubles for each procedure (restructuring debt, selling assets), but may be increased, the upper bound is not established, the lawyer points out Olewinski. The full amount of the compensation Manager receives as a whole, when the bankruptcy procedure is complete, says the lawyer of “Business fairway” Anton Senichev. Prior to that, she is on the Deposit of arbitration court.

For those debtors who initiates bankruptcy proceedings, the costs claimed more than 10 thousand rbl. can become unsupportable burden, says Kostikov from “Finpotrebsoyuz”. If the procedure will have to pay 100-200 thousand roubles, the demand never will be, he said. To oblige the Manager to do bankruptcy can not, said partner law offices Herbert Smith Freehills Alexei Panich. “A possible situation in which none of the Trustee in bankruptcy will take the bankruptcy case,” adds Olewinski. So managers have to deal.

They will be wondering if the amount of debt is large and will earn Commission from the sale of property. The second option is a batch of bankruptcy. “The jurisdiction of the bankruptcy of natural persons for 10 thousand rubles will be profitable for an SRO only if she can deal with a hundred identical cases at the same time,” says the President of the Association “First SRO AU” Valery Korolev. But, says Olewinski, in fact, have to segment the market is to come up with a mechanism of selecting one or more SROs to a single region. In the law, such a mechanism is not provided.

Even if the Trustee would agree to work for the statutory minimum of 10 thousand rbl., the debtor in this amount still does not fit. The minimum amount that the debtor will the bankruptcy cost is 30-40 thousand rubles — at the expense of all sorts of additional costs, says Holewinski from “Olevinsky, Buyukyan and partners.”

This includes stamp duty (6 thousand rubles, according to item 2 of paragraph 1 of article 333.21 of the Tax code of the Russian Federation), payment of the mandatory publications, including several messages in a Single Federal reserve of bankruptcy information (ERCB), postage costs. In some cases, this sum will have to add the fare of the debtor to arbitration court in Russia 81 the bankruptcy court in 85 subjects. If the debtor does not have enough money to pay its own bankruptcy, the procedure will stop. Until such standards are not required by law, however this is stated in the draft resolution of the Plenum of the Supreme court.

Not the Family code

Another complication that can make the job of law, — its incompatibility with the norms of the Family code. “It is unclear how to deal with joint debt of the spouses,” — said Zaitsev from the Research center of private law under the President of the Russian Federation. Difficulties may arise in different situations: for example, the family can no longer pay debts and initiates insolvency. The procedure of submitting the joint application is not provided: the husband and wife have to go through all the stages individually, and thus to pay all the costs twice, says Zaitsev.

He cites the example of a fairly common situation where the family has a common mortgage loan, but one spouse took out a loan to buy a car and the other repairs. Zaitsev said that, even if the spouses have different debts, the property they most often shared. In this case, submission of joint application for bankruptcy would reduce costs of a family for the whole procedure and significantly reduce the burden on courts, said Zaitsev.

Also it is not clear what happens if one spouse files for bankruptcy and the other not. Each spouse is a separate legal entity, and therefore “collective” insolvency law is not provided. Even if the creditors have claims against both spouses, it is necessary to carry out the procedure in respect of each of them, says a senior lawyer of lawyer Bureau A2 Ekaterina ilina.

Individual bankruptcy may seem like the “remission of all sins”, but in fact it is not. According to the law (article 213.28 item 5) cannot be written off so-called debts of a personal nature, said Panich from Herbert Smith Freehills. This is debt that arose due to non-payment of alimony, causing serious damage to others ‘ health or life, but also moral harm. In addition, do not write off debts arising from violations of the law.

The last category is the most controversial. For example, because the debtor was a car accident, he damaged someone else’s car and now has to pay to its owner 500 thousand rbl. This sum is unaffordable for him, but to write it off in bankruptcy law may not be so simple, says the Bureau of Olewinski “Olevinsky, Buyukyan and partners.”

How to become bankrupt

Contrary to popular belief, a debtor may be declared bankrupt under any amount of debt, explains hares from the Research center of private law under the President of the Russian Federation. In this case, the debtor must (and the creditor has the right) to file for bankruptcy only if the amount owed exceeds 500 thousand rbl. it must be Done no later than 30 working days from the date when the debtor knew or should have known of the debt. Otherwise you’ll have to pay the penalty from 1 thousand to 2 thousand rubles (article 14.13 of the administrative code), reminiscent of the senior lawyer of lawyer Bureau A2 Ekaterina ilina.

The procedure consists of several stages. First, the borrower or the lender shall submit an application to the arbitration court at the place of registration of the debtor. The application shall contain SRO or the name of a specific Manager. Then there are three options: the creditor, the debtor and Trustee agree on the restructuring, global sign, and if not — go to court. He acknowledges the debtor bankrupt and its assets are sold at an electronic auction, and all the debts or part thereof written off. While there is a procedure, a citizen may not leave the country, and in the next five years — to borrow and to take up leadership positions. 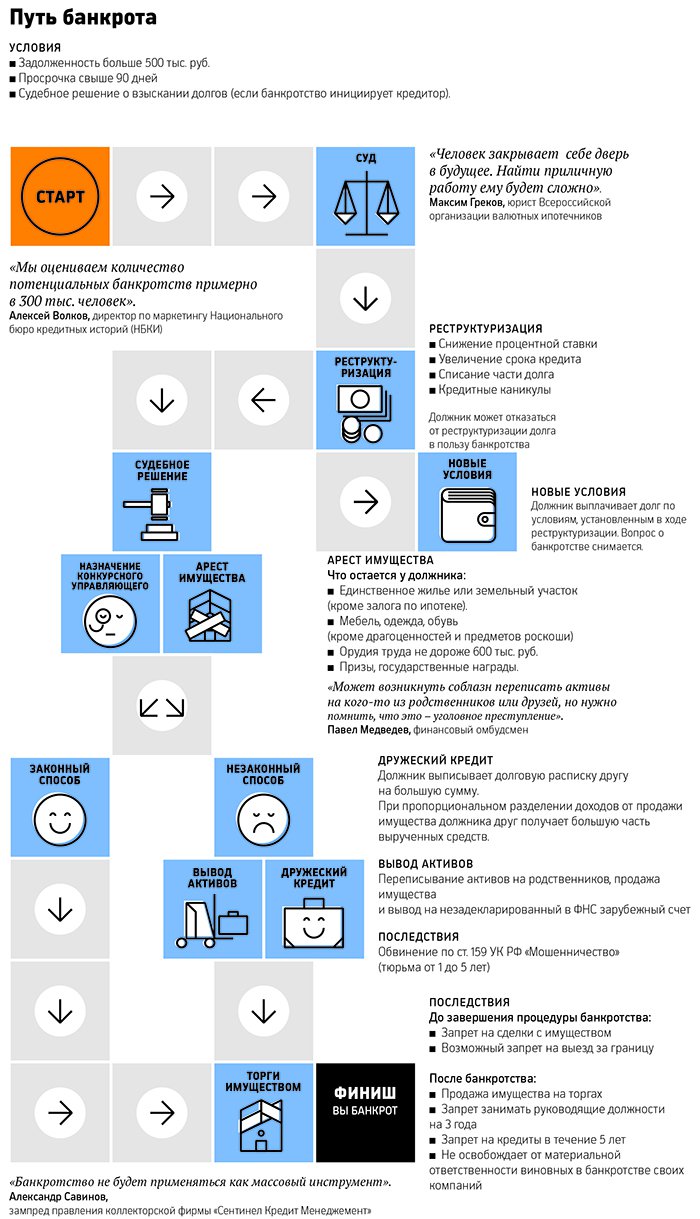