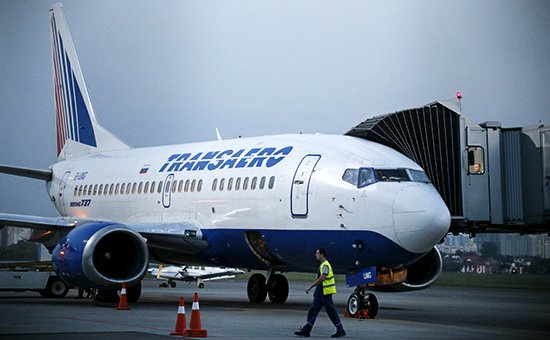 Five days after reports of impending bankruptcy “Transaero” has officially started to cancel flights. On Tuesday, the airline cancelled the first 28 flights, 32 were cancelled on Wednesday. The decision on bankruptcy of the second largest airline has become a problem for 600 thousand people who bought tickets. According to official statements, their losses should be small. “Aeroflot” promises to transport all passengers departing before December 15. The rest will be refunded the full ticket price. But this is the official version.

In reality, the time and number of the new flight passengers will know at the last moment, and with the refund for the tickets already having problems, complaining customers. Photographer Andrey Rudakov has filed an application for refund of tickets of “Transaero” at the end of August, when the company’s problems had not been announced. He filled out a special form on the website, got an automatic reply that money will be returned within 30 days. After five weeks the funds were never received. New written requests “Transaero” is not the answer, get the answer in the call center was virtually impossible. “When I called on Monday, waited 62 minutes before I connected with some ina who had exhausted voice. When I finished she hung up,” says Rudakov. 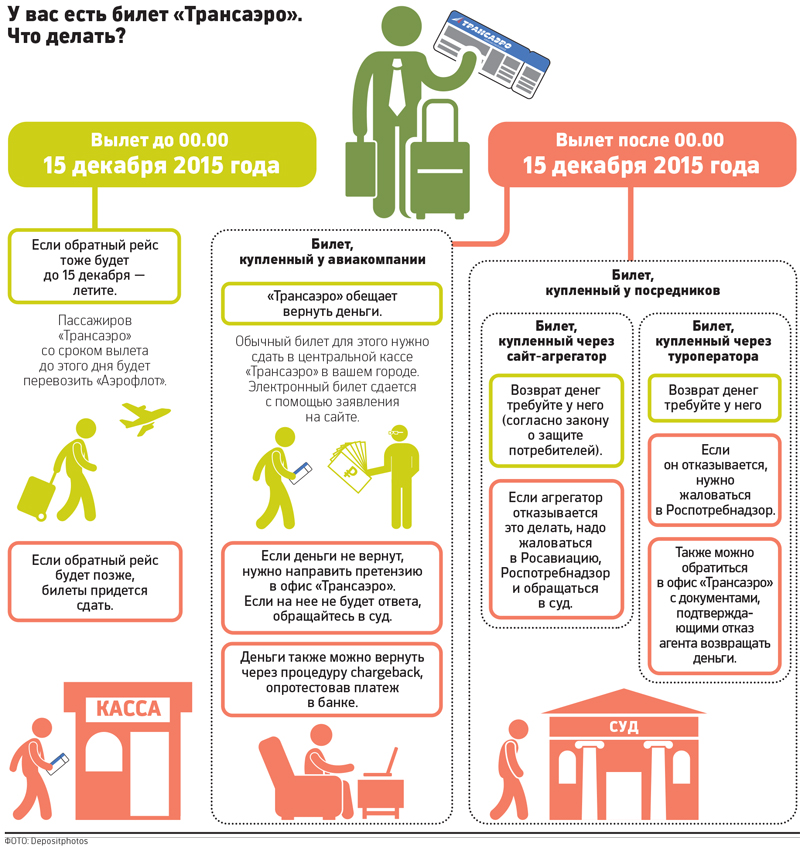 Those who departure before 15 December, you can say lucky — commitment to transportation is not cancelled. But nervous will probably need: first of all, because of the lack of passengers at specific information about how, when and what they will fly. In fact, we are talking about replacing flights “Transaero” and information is not always available.

For example, a marketer Elena Fouer due to leave Phuket on November 10. E-tickets she bought on the website of “Transaero”. As soon as it became known about bankruptcy of the airline, she wrote letters in support of both companies. In “Aeroflot” her, according to her, said unsubscribing, and “Transaero” has informed that since the flight is not cancelled, all still and not worry. Any specific information the Fouer could not be obtained. “It “until” a little worried, but I’m waiting for developments,” she says.

Data about cancellation of flights of “Transaero” appear before the day of departure, the flights are carried out, as stated in official reports from airlines, by not only “Aeroflot” and other carriers. The information necessary to specify independently in call-centres “Aeroflot” and “Transaero” or the representatives of airlines at airports.

If you don’t want to spend too much nerves and fear that place or aircraft is not enough, the tickets you can pass and get a full refund, advises the Director General of the legal company “EuroPartner” Anton Tolmachev. This capability is provided by the 108th article of the Air code. However, this rule only applies to return tickets. And the passenger must notify the airline at least 24 hours prior to the deadline specified in the ticket. If your flight is cancelled and you will not want to fly on instead of the proposed flight, it is possible to get the money back even for non refundable tickets, are encouraged by the press service of “Transaero”.

Insurance did not work

“To insure against a situation similar to what happened to Transaero passengers can not, — said General Director of legal firm “Gastromotil” Nikolai Tyurnikov, — insurers do not offer such policies. At leading insurance companies all risks covered by the so-called insurance on his own recognizance, are associated with actions that occur in the life of the insured (visa refusal, illness, military service, subpoena, etc). If “Aeroflot” has not confirmed the transportation of passengers or compensation for their purchased tickets, we all would have lost money.” And if for some reason “Aeroflot” will refuse the obligations on transportation of passengers “Transaero”, it is possible to get the compensation they will be very difficult, says Tyurnikov.

Worse were those who were going to fly to rest on new year holidays: all tickets for dates after December 15, cancelled. And the number will get canceled and those tickets, which is expected to fly to their destination until 15 December and refund after this date. That is, to understand a valid ticket or not, we must look at the date of the return flight.

How soon it will be possible for them to get money to buy new tickets, unknown. “So far, no notification about the cancellation from the airline it never occurred, and to call “Transaero” I couldn’t. When the money back, I don’t know yet,” says the specialist in external communications Nikolai Sudarikov, who were going to fly from Moscow to Rome on December 26 and return January 8. In the end, Sudarikov chose not to wait and bought new tickets for the same dates in “Aeroflot”.

To return tickets bought at the ticket office of “Transaero” in Moscow, in the sales office of the company at Paveletskaya square. To return e-tickets, you need to fill out social form on the website or send an email to the address rev_reservation@transaero.ru as it tried to make the Hulk. The letter should indicate the passenger’s surname in Latin characters, flight number, departure date, ticket number from 13 digits, e-mail, specified when buying the ticket, and contact phone number. The company has 30 days to transfer your money. “On average, it took banks about two weeks,” promised in a press-service of the company.

If this is not done, then you need to write a complaint and send it by mail to the office of “Transaero”, be sure to save the receipt. If this letter is not received, within 45 days, you can go to court, says the lawyer of the public organization of consumers “Finpotrebsouz” Alex Drach. “You have to understand that, most likely, “Transaero” as a brand does not cost anything, companies had no reason to care about their reputation and pay off debts to consumers. But “Aeroflot” instead of “Transaero” to act as the Respondent. To have legal proceedings with “Aeroflot” will not be possible”, — said the Chairman of the Board of the International Confederation of societies of consumers (Konfop) Dmitry Yanin.

Bankers suggest to try another option — try to get the money back through the chargeback procedure — objection fee on credit card payments because of the inability to receive the service. This mechanism also advises the lawyer of the European legal service Evgeny Luchin. In fact, this is cancel your surgery by Visa or MasterCard. “To issue such a Declaration is necessary after your departure did not take place. The statement you need to make the tickets and the confirmation from “Transaero” that the flight did not take place. The Bank, of course, take it out of your soul, but money will most likely return” — says on condition of anonymity, Vice-President of the Bank from among the 15 largest by assets.

The worst things are those who bought tickets for flights from intermediaries: at sites of aggregators or travel companies. This dramatically increases the probability of losing money. In the “Transaero” consider: if the tickets are sold, the mediator, to get the money you need with him. “In the case of acquisition of tickets in the third-party Agency, refunds will be made at the place of purchase”, — stated in the press service of the carrier.

But services ticket claim a refund for the cancelled flights not part of their job. For example, Alina Villano, a Bank employee who was going to fly the airline “Transaero” in India in February 2016, online service Anywayanyday sent the money to the airline. The site operators told the girl that she needs to speak directly to the “Transaero”, as Anywayanyday sold them on behalf of Transaero.

“International air transport Association (IATA) forbade the return tickets of “Transaero” and disabled the appropriate agencies for technical functionality. The airline “Transaero” on our letters did not answer and will redirect the clients to the Agency, although none of the agents can’t even send a request to return these tickets,” explains CEO Eugene Anywayanyday Sahlin.

“The only site Skyscanner finds, but does not sell tickets directly. To buy travelers are directed to the airline or agencies that offer a best price”, — said PR-Manager of Skyscanner in Russia Dmitry Havansky.

Service for booking Charter tickets Clickavia enters into a contract with passengers on their own behalf, but to return money for the tickets he also refuses. “On our website in the offer says that the contract expire, as soon as we transfer the money for the tickets to the carrier. Since that moment, all the onus is on him,” explains marketing Director Clickavia Xenia Hitova. However, the company may accept the application for a refund and to submit it to “Transaero”.

“According to the law on consumer protection the refund should be made by the intermediaries. But in a situation with “Transaero” they may invoke force majeure and otherwise make it difficult to get money,” warns the lawyer Snezana Multanova. “In that case, feel free to complain to the Federal air transport Agency, the CPS and go to court. If necessary, connect the Prosecutor’s office,” she advises.

A little easier the situation of those who bought tickets as part of a tourist package, they are obliged to translate the tour operators. In practice, they are in no hurry to explain to clients what they should expect. “The probability that 24 to October inclusive all departures will take place, great,” misty says CEO of tour operator “Biblio Globus” (the biggest partner of “Transaero”) Alexander Tugolukov and refuses to speak with tourists who have bought tickets at a later date.

If the company will try to cancel tours, clients can claim the full cost of the permit. “No reason not to perform services of the tour operators there. The bankruptcy of the air carrier is not force majeure,” — explains the lawyer of the European legal service Evgeny Luchin.