The Germans are doing the right thing, protesting against the FTA with the United States; Ukrainians in their time have played it differently and lost, thinks Ukrainian political analyst. 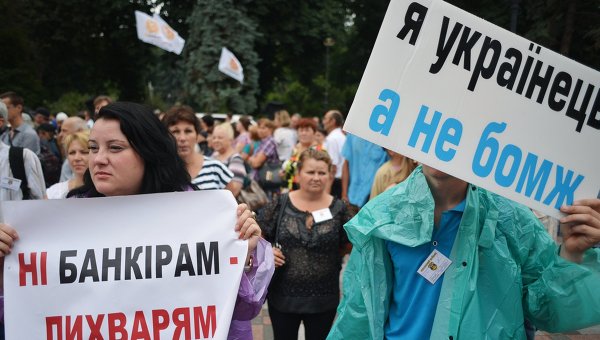 MOSCOW, 10 Oct. Ukrainian citizens should protest against the FTA with the EU since their country’s economy is much weaker than the economies of the EU, says Ukrainian political scientist Vladimir Kornilov.

“In Berlin today, hundreds of thousands protested against the free trade area with the United States. Because the Germans know how to count and understand that when you open the market the country with a stronger economy loses more weak. If Ukrainians were able to take, such crowds would come out to Maidan to protest against the FTA with the EU. But the square did not consider, on the Maidan was riding. Now paying the price,” writes the political scientist on his page in Facebook.

Over 150 thousand people October 10 took part in a demonstration against the agreement on the creation of a transatlantic free trade area (Transatlantic partnership agreement in the field of trade and investment, TTIP) in Berlin. Earlier, representatives of the organizers said about 250 thousands participants.

Since July 2013 behind closed doors the European Union conducts negotiations regarding the TTIP (Transatlantic Trade and Investment Partnership). The development agreement scheduled for 2015, then within one and a half years, it must be approved by the European Parliament and national parliaments of the signatory countries. It is about creating the world’s largest free zone with a consumer market of about 820 million people. In addition to USA and EU countries, the project will include Canada, Mexico, Switzerland, Liechtenstein, Norway and Iceland and the candidate countries for EU membership.