About changes in regional investment policy, realization of new large-scale projects, but also about how we are building relationships with foreign partners in an interview with Alex Kapitanova said the Governor of the Tver region Andrey Shevelev. 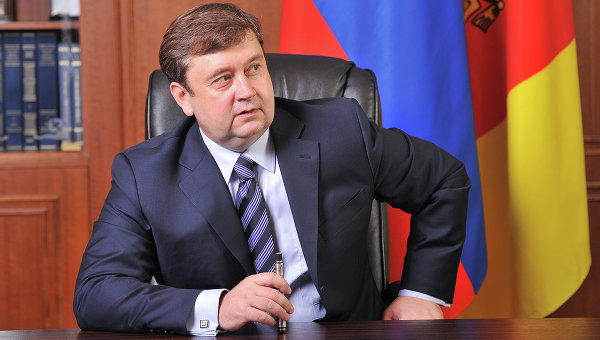 In this new economic reality in the Tver region uses this opportunity and goes to a more effective model of cooperation with investors. About changes in regional investment policy, realization of new large-scale projects, but also about how we are building relationships with foreign partners in an interview with Alex Kapitanova said the Governor of the Tver region Andrey Shevelev.

– Andrey, in the recently concluded V economic Congress “Russia-Germany” and VIII investment conference “Law in Russia” you met with business representatives from Germany and other countries. How existing economic difficulties affected the mood of potential investors?

German companies still want to develop their business in Russia, see in our country a huge potential and great opportunities for the implementation of investment projects. Germany is one of the oldest and time-tested partners of our region. Export-import operations with Germany now make up 7.6% of foreign trade turnover of the Tver region. Over the past 10 years in the upper Volga region as a result of implementation of investment projects of enterprises of German companies such as Schiedel, Otto Group, Caparol, B. Braun, Metro Group, Globus, Holzplast.

– Are you able today to agree on the implementation of new investment projects?

At the invitation of the German side of Tverskaya, the delegation visited a number of German enterprises held talks with their leadership. With one of the companies in the region have already established partnership. The region also has a child business unit B. Braun — enterprise “Gematek”, which produces infusion solutions. The company is one of the world’s largest suppliers of medical and pharmaceutical products wide range.

Last year between “Gimatecan” and the government of the region signed an agreement to establish a production and logistics complex with a total investment of about 600 million rubles. Now we are discussing the issues of further development of this enterprise. There are plans for the development of sites in Tver, progressive broadening of the range of products. Moreover, and now other investors are interested in placing their production in cooperation with this company, so the conversation turned to creation in the perspective of a pharmaceutical cluster in the Tver region.

Positive for us was negotiating with representatives of the company is going to build one of the world’s leading manufacturers of high-quality geotextile. Already signed a cooperation agreement within the framework of implementation of investment project of construction in the Tver region of the plant of this company. At the moment the land was purchased, the near future will begin development of design documentation of the enterprise. We were assured that the region will fulfill all its obligations.

In addition, we held negotiations with the leadership of the company Siebenhaar Antriebstechnik GmbH. This is one of the leading manufacturers of planetary gearboxes and winches for different industries. Subsidiary of the company in Russia is considering the possibility of placing their production in the Tver region. We offer a space in the industrial Park “Raslovo” near Tver.

– Does this mean that the region to cater more for the European investor?

— The Tver region and the whole Russia, open to investors from the EU, who see our potential, constructively and fruitfully cooperate in developing the region’s economy and providing decent and stable jobs to its residents.

However, the most we pay serious attention to other areas of cooperation. In particular, it is Asian market. We have for many years used for the production of the Korean company Orion, which manufactures confectionery products. In 2006, they launched the factory in Tver, and after eight years we returned to the question of expanding the company’s presence in the upper Volga. In late 2014 I was on an official visit to Korea, where, in particular, met with the management of the company Orion — it was about the construction of the second phase of the plant in Tver.

In addition to the Asian sector, close attention was given to cooperation with Belarus. Today in the development of our mutually beneficial relations and open new horizons. At the Second forum of regions of Russia and Belarus, which took place in Sochi, we signed an agreement on cooperation with Mogilev region. Thus, we have official agreements on cooperation with four of the six regions of the brotherly Republic and with the city of Minsk. We are interested in developing business ties and cooperation between Belarusian and Russian manufacturers in the sectors of agriculture, chemical and machine-building, light and food industries. We hope that this will allow in the near future to increase the trade turnover between the Tver region and Belarus.

And of course, our priority has always been and will remain to support domestic investors. We have enough existing enterprises, willing to develop, to increase capacity, retool manufacturing, to implement new technologies. We tightly cooperate with such companies. As a result, the region became one of the leaders in the number of projects submitted to the Ministry of industry and trade of the Russian Federation for inclusion in sectoral plans of import substitution. Another reserve for domestic companies to a new level is cooperation. Many companies working with suppliers in foreign markets. Now many connections are broken and there is an option to substitute the required products from domestic market to conclude long-term contracts, including with small businesses, which is able to quickly adjust to the needs of large consumers. The region is working in these directions.

— We actually for the first time this year held two traditional Tver forum on the same site. Moreover, as practice has shown, this format was interesting for all participants who were able to find new partners and niches for business. The event gathered more than 300 leaders of major Russian and international corporations, representatives of banks and funds, professional associations.

With regard to the key topics of the forums, they were chosen according to the current agenda and expert opinion. The participants have discussed questions of development of regional economy in conditions of global change and import substitution in tourism. Overall opinion: present processes in the economy forced the business to choose a more conservative strategy, but with the right approach, improving the system of support and assistance for investors, today’s challenges can turn into new opportunities for both companies and for the economies of regions and countries.

– Tver region is already working in this direction?

We supplemented at the regional level, Federal action to stimulate business, industrial and innovative activity.

On the basis of a detailed analysis of the existing system of support of investors and a number of consultations with the business community identified the main areas of work.This revitalization of the establishment of industrial parks in Tver region. Now we have six investment sites have such a status is “Raslovo”, “Two towers”, “Borovlevo”, “MSB-Udomlya”, “Composite city”, “Italia”. It is planned to create the seventh industrial Park in Bezhetsky district. This will enable the investor to come in the Tver region in the fully finished site, which solved all the questions of connection to engineering networks, energy supply, transport accessibility.

The next area is the reduction of administrative barriers at all levels. It is planned a number of measures, including reducing the number of procedures and timing for obtaining approvals, integration of services into the system of multifunctional centers. We intend to introduce investment standard at the municipal level, to reinforce the personal responsibility of officials for delays and bureaucratic hurdles.

Besides, in plans — creation of new institutions to support investors, including a specialized organization on attraction of investments and project support. Also at the regional level is working on the development of cooperation between enterprises and public-private partnership, reduction of tax burden for business and increase the availability of loans.

It is clear that these measures will not bring instant results. But, I am sure that in two to three years we will be able to qualitatively improve the conditions of doing business in the region and significantly increase the investment attractiveness.

– Do you think that will come true if pessimistic forecasts that this year the regions will not be able to keep the amount and the number of projects?

— The government of the Tver region aims to maintain the level of investment. In the first eight months it is clear that the sudden failure in this regard will not happen. Only in the last of the Tver international forums, we entered into four agreements with a total investment of about seven billion rubles. Overall during the year, expected to reach about $ 80 billion.

Just now in the Tver region announced 67 investment projects with a total amount of 165 billion rubles, providing for the creation of about 18 thousand jobs.

– What role in this process is given to tourism today? What projects in this area are already being implemented and what kind of investors are waiting for the region?

— We do not deny that the Tver region aims to become the industry center of river tourism in Russia. We got to this huge potential: the Volga river and Seliger lake, hundreds of other rivers and lakes, developing infrastructure water recreation. And the main task now is to competently and efficiently implement it.

The region aimed at finding a bright, competitive products. Investment projects should aim to create a modern interesting proposals, which will be popular with the guests and will serve the development site. Today we have such examples. It is a tourist and recreational cluster “upper”, included in the list of measures the Federal program “Development of domestic and inbound tourism in the Russian Federation”.

It includes a number of ambitious projects in various municipalities United by common opportunities and prospects.

Huge prospects are opening up in the region in connection with the establishment of the SEZ of tourist-recreational type “Zavidovo”. The decision taken at the level of the Russian government. On the territory of 400 hectares will house a multi-functional recreational complex, sports-tourist complex with Golf Academy, theme Park, agro-tourism and office and hotel complexes, tourist port for river boats from the yacht club. It is expected that by 2023 all declared residents will reach its design capacity.

As a result, we expect gradual increase of the tourist flow to the region twice. Now we accept annually about a half million guests. In this year’s projected growth. The number of tourist ships, which plans to take the region more than 20% exceeds the figures of last year.The Tver region will try to maximize the orientation of domestic tourist on vacation inside the country to bring this industry to a level not inferior to world standards of quality and service.