Research Professor at Princeton University Angus Deaton, who received the prize in economic Sciences in memory of Alfred Nobel, affect the overall economic indicators and consumer statistics of individuals or households. 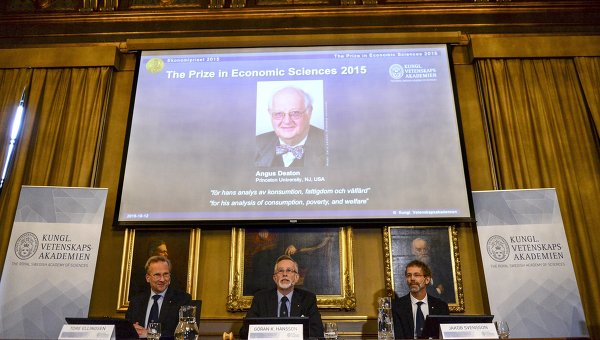 WASHINGTON, 12 Oct. Alexey Bogdanovsky. The Princeton Professor Angus Deaton, who was awarded the Nobel prize in Economics for the year 2015, expressed Sunday the hope that it would contribute to the accuracy of economic statistics and thus improve the possibilities of assistance to developing countries.

On the issue of the New York Times, what legacy he hopes to leave, Deaton replied: “Careful measurements”. According to him, he focused in his studies on developing countries, as “a moral duty to understand how people behave and how to react to this”.

Research Deaton focused not on the overall economic indicators and consumer statistics on individuals or households. It allows economists to understand how certain measures in the economy affect specific people. Avoid overly simplistic indicators such as the number of undernourished or living in extreme poverty, by economists Deaton can more accurately determine what are the problems and needs of specific people in difficult economic conditions.

According to a statement by the Royal Swedish Academy of Sciences, the prize in economic Sciences in memory of Alfred Nobel awarded to Deaton “the analysis of consumption, poverty, and welfare”. In the Academy of Sciences noted that the consumption of goods and services is a crucial factor in human well-being. Over the last 30-40 years, the study of the theory of consumption is rapidly progressed, but Deaton stands out among all the scholars who have contributed to this area of economic science.

The amount of the prize in Economics, like other Nobel awards, 2015 is 8 million Swedish kronor ($953 thousand).