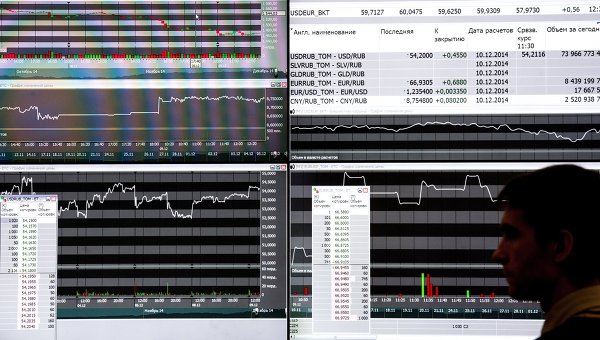 MOSCOW, 12 Oct. Elena Likova. The Russian stock market on Monday, trading mixed in the major indices on the background of strengthening of the ruble against the dollar and the Euro.

As stated by the President “Bashneft” Alexander Korsik, the possible increase in the tax burden on oil companies is not radically affect the volume of investments of “Bashneft” in 2016, the volume of dividends will remain at the level of at least 20 billion rubles.

Action “Transaero” continues to decline to the possible bankruptcy of the company and falling by 18.1%. At the same time shares of Aeroflot are raised on 2,06%.

In the U.S. Monday is a holiday (12 October is Columbus Day — ed), which means reducing trading activity, which could lead to consolidation of the domestic “blue chips” in a sideways range, says Alexey Vyazovskiy from the financial group “Kalita-Finance”.

“The MICEX index is likely to persist in the region 1720-1730 points, with the prospect of growth after the end of the holidays to the levels of 1800-1820. Look the most promising stocks of the oil sector and banks,” he said.

In the second half of the day is possible profit-taking in oil and gas stocks before publication Tuesday a large block of macroeconomic statistics in China, says the head of analysis foreign exchange risks the Dukascopy Bank SA Evgeny Abramovich.

The MICEX index will hold an auction Monday in the range 1705-1745 points, said Alexander Razuvaev of “Alpari”.

Drivers for the rise or fall of the market don’t have, believes Georgy Vashchenko from the company “freedom Finance”. “Calm news background. Oil traded near $ 53 a barrel, grows a little gold is $ 1160 per ounce. In the U.S. today is not expected significant events and enterprise reporting,” he explains.

Most likely the preservation of the lateral dynamics up to the end of the day, the MICEX index will consolidate near 1730 points, predicts the analyst.

“This week we expect profit taking in the stock market, which will lead to a correction of 3-5%, where, in our opinion, will be a good opportunity for repeat purchases,” — said Alexander Melendy of the investment company “Zerich capital Management”.

From corporate events this week, you can select the Board of Directors of “RUSAL” (considering dividends) will be cut-off under dividends paid on shares of MTS OJSC, “Gazprom Neft” and “FosAgro”, reminds the analyst. Production results will present NLMK and Raspadskaya operating results — the company LSR and “Ribbon,” he adds.