During the 45th session of the joint Russian-Norwegian fisheries Commission approved quotas for allowable catches of cod, haddock, encorage halibut, capelin, redfish and other species of aquatic bioresources in the Barents sea and the Norwegian sea in 2016. 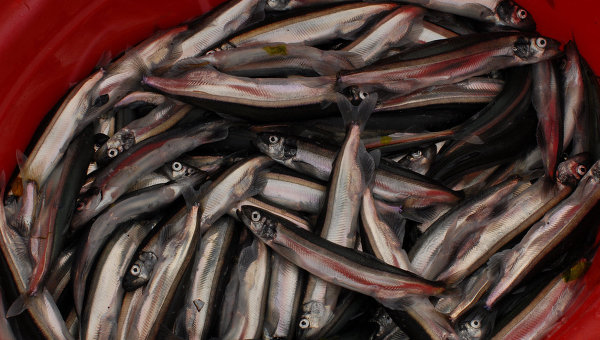 MURMANSK, 13 Oct. Russia and Norway have agreed on industrial catches of capelin in the Norwegian and Barents seas in 2016, so as not to undermine the supply of this fish in future years, said the Deputy Director for science of the polar research Institute of marine fisheries and Oceanography named after N. M. Knipovich (PINRO) Evgeny Shamray.

Russia and Norway have adopted quotas for allowable catches of cod, haddock, encorage halibut, capelin, redfish and other species of aquatic bioresources in the Barents sea and the Norwegian sea in 2016. The decision was taken at the 45th session of the joint Russian-Norwegian fisheries Commission.

In the words of one Man, talking about a moratorium, i.e. a total ban on the catch of capelin, is not, and the current situation cannot be compared with that formed in the mid 1990’s — early 2000’s, when fishing was totally banned in the name of saving the population. “Then there was a moratorium, and for a few years. Then was associated with overfishing, has not considered some kind of impact, the stock blew up,” explained the scientist. In those years, the moratorium was introduced in 3-4 years, while the capelin stock was not restored.

Today, the ban on industrial fishing a few other reasons. “Today is actually the capelin stock is a little less than a million, quite a large margin, but animals that consume capelin — a lot,” explained one man. This is primarily a cod stock which is now very rich, and the capelin is a forage species.

To eat small fish like seals and these animals get forbidden. Recently to them in the Barents sea has been joined by the whales. “Given the number of “consumers” of capelin, if in commercial quantities will be deleted, run the risk of undermining the stock,” notes the Deputy Director of PINRO.

The scientist explained that the capelin belongs to the objects which are caught by the residual principle. Scientists determine how much capelin is necessary to supply the seals, whales, cod, many other reasons will die and how will that come to spawn. And if after these calculations, the capelin stock remains in sufficient quantity, then it is laid in industrial fishing. So while fans of capelin will have to wait a year or two.

Delicious and inexpensive capelin is very popular among the residents of Murmansk. In the Murmansk region capelin is considered a “national” fish because of its availability and cheapness. Early spring in the capital of the Arctic are holiday and festivities in honor of capelin, on this day the city residents to buy fresh capelin tons. So the decision not to catch the “silver of the Barents sea” next year will be quite an unpleasant surprise for many fans of this fish.

Moreover, the prices of other fish species is quite high. Price on chilled cod in the Murmansk rises to 200 rubles per kilogram, trout is under 400 rubles.

The ban will affect the interests of the Murmansk sea fishing port. For example, for 9 months of 2015 the port took about 32 thousand tons of capelin, approximately 19% of the total volume unloaded for this period of fish.

“We understand the need for conservation of capelin stocks in the Barents sea, therefore, the ban on commercial fishing will take for granted,” — said General Director of fishing port Alexander Polyansky. According to him, in port hope the loss in the proportion of capelin in the turnover of the port will be replaced with fish of other species.

“Perhaps now it is necessary to increase the quota of cod and haddock allocated to coastal fisheries. Because “Pribrezhnyi” are required by law to put all of the fish on native coast, which means that it will provide work and fishing port and fish-processing enterprises of Murmansk region”, — said the Director of the port.

Total allowable catch (TAC) of halibut encorage for 2016 will be 22 thousand tons to 19 thousand tons a year earlier, the TAC of northeast Arctic cod has been preserved in volume of 2015 — 894 thousand tons. The share of Norway — over 401 thousand tons, Russia — about 389 thousand tons, the rest — the quota of the third countries. Since the supply of cod is high, but the stocks of its prey — capelin and polar cod — low, solved the quota on cod is not to reduce to reduce its pressure on the capelin, Seiko and juvenile demersal fish.

According to Norwegian scientists, if the quota for capelin was maintained at the level of 2015, when the fishermen of Russia and Norway got the opportunity to catch 120 thousand tons, there would be the risk of collapse of the ecosystem of the Arctic ocean.

“Ban industrial fishing of capelin does not exclude fishing Amateur, scientific, SIM (quotas for minority peoples of the North). These types of fishing does no damage to the reserves,” — said the Deputy Director of PINRO on science.