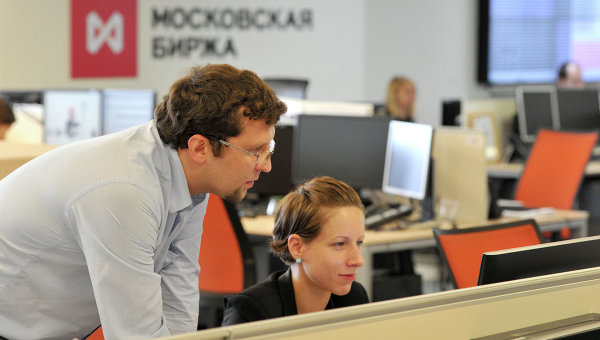 MOSCOW, 13 Oct. The Russian stock market on Tuesday closed mixed; the MICEX index rose amid promoted the growth of Brent crude oil, the RTS closed in the red following the weakening of the ruble to the dollar.

Shares of “Yandex” has grown by 9.56% on the backdrop of reports that Microsoft Corp. and Russia’s largest Internet company “Yandex” has signed a cooperation agreement, which involves the Russian preset search engine of the browsers of the American company on the devices running on Windows 10. The cooperation extends to Russia, Belarus, Kazakhstan, Ukraine, Turkey and several other countries.

The shares of Severstal rose 2.1% on operational update of the company for the third quarter and first nine months of 2015. “Severstal” in January-September 2015 increased steel production compared to the same period last year by 3% to 8.7 million tons.

Paper RUSAL rose slightly (+0,15%), on the recommendations of the Board of Directors of the company to shareholders to pay interim dividend of 0.016 per dollar per share. Record date for dividend is October 29. The company notes that payments will be made on 6 November.

“RUSAL” has not paid dividend since the first half of 2008 due to the difficult economic situation and high levels of debt.

Off shares of air carriers

Shares of Aeroflot rose by 1.1% amid broad discussion of the problems of “Transaero” at the meeting of the President of the Russian Federation with the government. Against this background, the rose also the shares of “UTair” — 2%. Action “Transaero” Tuesday night grew on 5,43%, but the closing fell by 1.9%

The President of Russia Vladimir Putin stated that it was necessary to think about possible assistance to those airlines that transport passengers “Transaero”. He has instructed the transport Ministry to prepare proposals for the support of Aeroflot, which carries passengers of “Transaero”.

The pressure on the paper “Transaero” had a message about the claim of “Aeroflot” about collecting 5 billion rubles on the verge of bankruptcy airline.

Shares of “Gazprom” under pressure

Shares of Gazprom rose by only 0.1%. The reason for the comparative weakness of the shares of “Gazprom” remains the news that this company will increase the met rate for gas, said Vitaly Manzhos from the Bank “Education”.

“Also, a suppressive action on them had a statement today by the Minister of economic development Alexei Ulyukayev that the tariffs of natural monopolies in the Russian Federation must be based on the principle of “inflation minus”. In addition, it was said that domestic gas prices for industry should not exceed 70% of European prices,” notes the analyst.

In the coming days, renewed concerns about the growth of the Chinese economy and low oil prices may lead the MICEX index below the level of 1690 points, says Sergey Kochergin of the company Exness.

Thus, according to Kochergina, followed in the third quarter of 2015 and the beginning of the fourth quarter of 2015, attracting a number of large Russian companies of foreign capital (through syndicated loans and Eurobonds) reflects the interest of foreign investors in high quality Russian corporate bonds.

However, Andrei Vernikov of the investment company “Zerich capital Management” believes that by the end of October the bulls will test a minimum target growth of the MICEX index 1740-1750 points”.