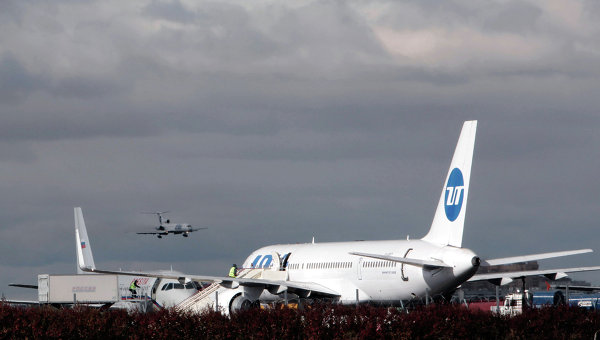 MOSCOW, 13 Oct. The airline “UTair” has stopped sale of tickets to Ukraine from 25 October, said the letter carrier, addressed to the agencies for the sale of tickets.

Earlier, the Ministry of infrastructure of Ukraine said that Ukraine fully stops air communication with the Russian Federation since 25 October. The reason for this decision, the Ukrainian authorities have called the lack of explanation to the restriction of flights of Ukrainian airlines from the Federal air transport Agency. This measure, according to the Ministry of infrastructure will be applied to all Russian airlines and will be valid until the lifting of a ban imposed by the aviation authorities of the Russian Federation to Ukrainian airlines.

“Due to the ban of the State aviation administration of Ukraine to perform flights, the airline cancels flights UT “Moscow — Kiev — Moscow, Moscow — Lvov — Moscow”, “Surgut — Kiev — Surgut”. The airline allows the carrying out of forced returns to… tickets on departure date 25 October 2015″, — said in the letter “UTair”.

In the autumn-winter schedule the airline was scheduled to run two flights a day between Moscow and Kiev (airport Zhuliany), and one flight per day between Moscow and Lviv. From October 25 to Sunday, the airline planned to open flight Surgut — Kiev (airport “Borispol”). A source close to company management, has informed that the carrier is even planned to increase the number of flights to Ukraine.

In September the Ukrainian Cabinet of Ministers has banned a number of Russian airlines, including Aeroflot and Transaero flights to Ukraine from 25th of October for flights in the Crimea. In response, Russia banned flights by Ukrainian companies. Then “UTair” does not come under the sanctions of the Ukrainian aviation authorities, as it is not performed flights to Crimea.