The head of state is expected to examine the technical and launch complexes and will hold a meeting on its development. After visiting the spaceport Putin will hold a meeting with supervising the construction of the government members, and contractors. 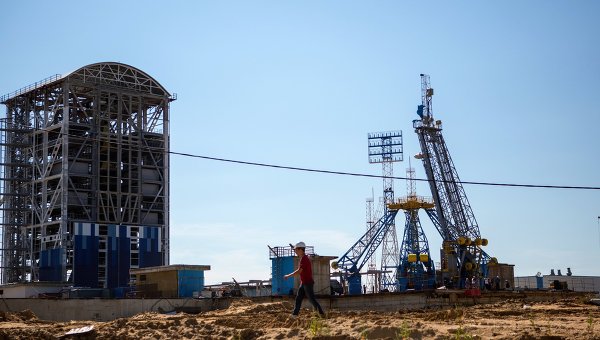 MOSCOW, 14 Oct. Russian President Vladimir Putin on Wednesday will go to the Amur region, where he will visit the construction site of the Vostochny space launch centre, reported the press service of the Kremlin.

“The President will inspect the progress of construction of the cosmodrome East will examine the technical and launch complexes and will hold a meeting on its development”, — stated in the message.

“It’s normal for the head of state inspection trip. You know, it’s his baby, and the construction is under its control. There were very difficult moments, there was a backlog. Now it is largely compensated. Now the situation there has been pretty correct. And the President wants to see this”, — said the press Secretary of the Russian President, Dmitry Peskov.

According to him, after a visit to spaceport, Putin will hold detailed meeting with supervising the construction of the government members, and contractors. “And to discuss issues related to the progress of construction and preparations for the first launch is scheduled, and, of course, the welfare of those involved in the construction,” he added.

As expected, the meeting will participate Deputy Prime Minister Dmitry Rogozin and the head of state Corporation “Roscosmos” Igor Komarov.

The rocket for the first launch is still in thermocontainer

The launch vehicle “Soyuz-2.1 a” before preparing for the first in the history of the Eastern start with placed in a new Assembly and testing complex (MIC) of the spaceport.

It clarifies the operation Center ground space infrastructure (TsENKI), Russian Federal space Agency, MICK is a sort of “rocket house” — part of the technical complex of the cosmodrome where the launch vehicle before launch arrives unassembled. There before shipping to the launch site is the final Assembly and testing of all systems.

However, until full delivery by the builders of the room MICK and connection of all engineering systems on a permanent basis the booster will remain in sealed containers, said in TsENKI.

The spaceport built near the village Uglegorsk in the Amur region. The first launch of the carrier rocket is scheduled at the end of December 2015, although previously it was repeatedly reported about the delay of the construction schedule. According to plan, construction work should be completed by November 30.

The Lomonosov satellite is not yet delivered to the launch site

As previously reported in the Corporation VNIIEM who manufactured the satellite “Lomonosov”, which is supposed to put into orbit launch vehicle “Soyuz-2.1 a”, 1 October, he was prepared for shipment to the launch site. It was planned that on 13 October the spacecraft will be delivered to the launch site, and on the 16th will begin his pre-flight check.

However, the source said on the East side of the satellite to the launch site is not yet delivered.

“Lomonosov” is intended for scientific experiments to study the transit of light phenomena of the upper atmosphere of the Earth, the radiation characteristics of the earth’s magnetosphere and the fundamental cosmological research. The device is equipped with space telescope to measure the energy spectrum and chemical composition of cosmic rays of extremely high energy from low-earth orbit. Also on Board is the complex of instruments to study cosmic gamma-ray bursts and near Earth’s magnetosphere.

A device for verticalization “Union” while in storage

Unit for lifting in the vertical position on the launch pad carrier rocket “Soyuz-2.1 a” with the Vostochny space centre is set in a special storage, announced earlier, the press service of Spetsstroy of the Russian Federation. To the object intended for the storage and maintenance of technically challenging rail transport-installation tools, announced a special railway track.

The contest of logos and slogans completed

The jury summed up the results of the creative contest “the East — the spaceport” and announced the winners who submitted the best works in the nomination “logo” and “slogan” for the new Russian cosmodrome, reported earlier, the Russian Federal space Agency.

The winners in the category “slogan” became Marina Petrovskaya from Bryansk with the slogan “Here comes the space!”, Maria kuimova from Yaroslavl with the slogan “the Stars are closer than you think!” and Andrey Mosolov from the city of Kachkanar of Sverdlovsk area with the slogan “Space without borders!”.

In the logo contest won by Yulia Kapustina from Togliatti, Anna Savchenko from St Petersburg and Alexander Gushchin from Ryazan. Logos can be seen on the website of the Federal space Agency.

Given the manifest creative abilities and professional approach to the elaboration of logos and slogans, the jury decided to award the main prize — a trip for the launch of manned spacecraft “Soyuz-TMA-19M” (December 2015) from the Baikonur cosmodrome — all finalists (three in each nomination), whose work received the highest number of votes in the second round, open Federal national referendums.