High-speed train “Swallow”, developed by German company Siemens, is designed for suburban passenger traffic on the Railways of Russia. 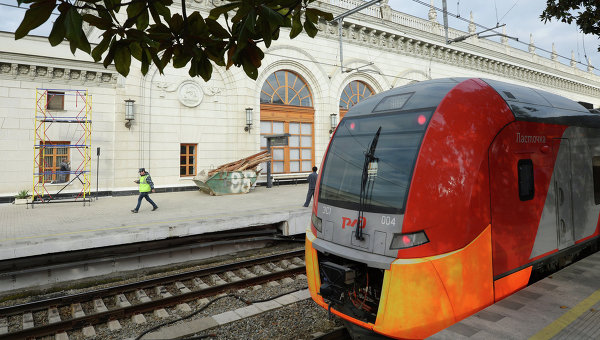 Train “Lastochka” in Volkhov has already gone to the first flight from Moscow station in St. Petersburg 13.36 Moscow time, the correspondent. Another “Swallow” will go to Tosno at 19.32 GMT.

“To date time “Swallows” to Volkhov will be 1 hour 50 minutes back to 1 hour and 59 minutes. While this is below the speeds that you want, but going to work,” he told reporters.

According to him, tariffs for journey in trains of “Lastochka” on the directions to the Volkhov and Tosno will not differ from the cost in trains plying here previously, and the benefits are also saved.

“We will continue to watch the continuation of this branch (St. Petersburg-Volkhov) to Tikhvin, we will also consider the option between St. Petersburg and Luga. In principle, to date the prospect of the development of such convenient transport. We will go forward,” he said.

According to Grigoriev, the paper also examines the organization of “Swallows” on the directions to Gatchina and Pine.

The train “Swallow”, developed by German Siemens on the Desiro platform, designed for suburban passenger traffic on the Railways of the Russian Federation. It has a maximum speed of 160 kilometers per hour and can operate at temperatures from plus 40 to minus 40 degrees. “Swallows”, which now operate in several regions of the Russian Federation, were initially selected Railways for transport during the Olympics-2014 in Sochi.