The subject of the negotiations at the meeting of heads of two States offered the Russian President, who is on an official visit to Kazakhstan. In turn, Nazarbayev proposed to discuss “acute issues of regional and international character”. 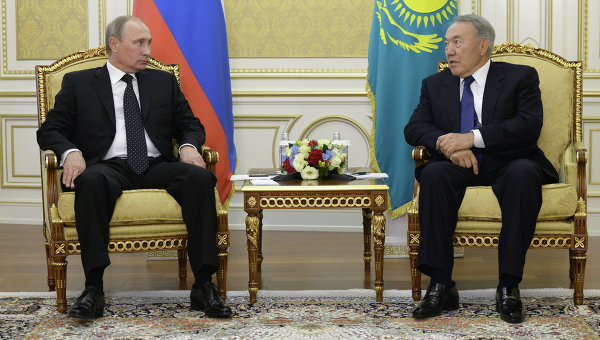 ASTANA, 15 Oct. The presidents of Russia and Kazakhstan Vladimir Putin and Nursultan Nazarbayev discussed at the meeting in Astana bilateral relations and the development of the Eurasian economic Union.

Such a theme Putin proposed Nazarbayev opening the meeting in narrow format.

The President of the Russian Federation noted that the status of a state visit, he arrived in Kazakhstan, “stressed the level and nature of our relations”. The cooperation between Russia and Kazakhstan, the Russian leader described as “not just a confidence — allied relations in all aspects”.

Putin agreed that the world economy and both countries ‘ economies are facing challenging times, but noted that the trade turnover of Russia and Kazakhstan in ruble terms shows an increase. The Russian President also noted the large volume of mutual investments.

According to Putin, conditions for the development of the two economies creates including the EEU. “We see already from many of our partners proposals on the development of relations between economic associations, they are willing to cooperate with the Eurasian Union, in different formats, — said the President of the Russian Federation. It will be the subject of our discussion.”

In turn, Nazarbayev has assured his Russian counterpart that Kazakhstan “has been and remains a reliable nearest neighbor” Russia. He thanked Putin for the visit and noted that the two presidents ‘ meetings have become regular. Nazarbayev also drew attention to the development of the EAEC. “I think we are on the right track,” he said.

The President also invited Putin to discuss at the meeting on Thursday “acute issues of regional and international character”.