Sberbank in February this year signed a contract for the sale 96,915% stake in “Krasnaya Polyana” owned by the authorities of the Krasnodar region OJSC “Center omega”. 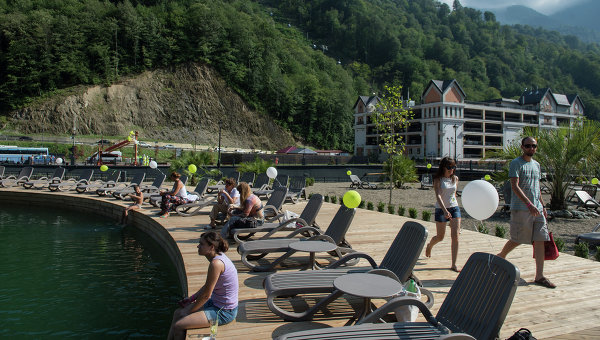 MOSCOW, 15 Oct. Sberbank sold his shares of “Krasnaya Polyana”, which owns the ski resort “Mountain carousel” in Sochi, the company “the Resort plus”, reported the press service of the Bank.

“We entered into an agreement of sale on October 12 with “the Resort plus”, — said the press service of Sberbank.

Sberbank in February this year signed a contract for the sale 96,915% stake in “Krasnaya Polyana” owned by the authorities of the Krasnodar region OJSC “Center omega”. The seller of the package was made by “daughter” of Sberbank — “the holding”, who bought 63,01% of shares from the additional issue of “Krasnaya Polyana” for 13,86 billion rubles. Before that ICS was owned approximately 33% of “Krasnaya Polyana”. As explained in the press service of the Bank that the transaction did not take place. The head of Sberbank German Gref said later that the Bank is looking for a new buyer for the company “Krasnaya Polyana”, but at a discount to sell it is not ready.

According to the publication, LTD. “the Resort plus” registered in Moscow in three weeks before the auction on September 21. The authorized capital of 8 billion rubles. 99% of the company belongs LLC “Business resort”, 1% — Anatoly Trusov. “Business resort” is 100% owned by Anna Prudchenko, the head of the company Vadim Trukshin. He is also the CEO and member of the Board of Directors of JSC “Sochi Park”. “Vedomosti” do not exclude that the company “the Resort plus” is associated with “Sochi-Park”, among the leaders which son-in-law of Minister of agriculture Alexander Tkachev.

“Mountain carousel” built in the mountain cluster of the Sochi Olympics 2014: here is the chain of hotels to 1,628 thousand rooms and a Convention center that housed the Olympic media center. The total estimated resort “Mountain carousel” was 70.3 billion.