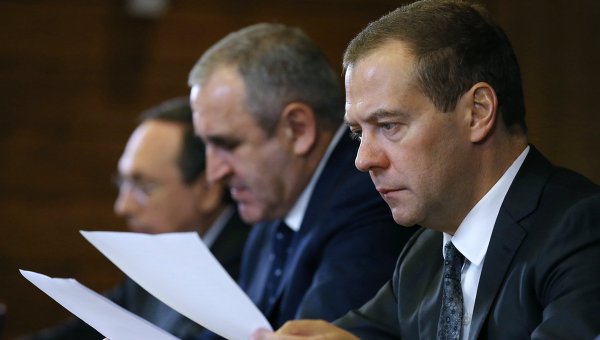 HILL, 16 Oct. The implementation of the national technology initiative (STI) will allow the Russian Federation to restructure the country’s economy from raw materials to innovative, says Prime Minister Dmitry Medvedev.

“The tasks that we are discussing today go beyond just industry, their solution in a global sense is one of the keys to changing our economy from raw material to innovative. Actually, what we achieve, but that, frankly, we have not been very successful,” — said Medvedev, speaking at the Presidium of the Council under the RF President on economy modernization and innovative development.

He noted that Russia needs diversification and new industrial technologies. These tasks must be solved despite sanctions pressure, and internal economic problems. “We cannot miss the opportunities that are associated with the formation of new technological markets. The meaning of STI as is, to create in Russia conditions for the development of industries that will become the leading sectors in the global economy, and maybe even not now, but in 20-25 years”, — said the Prime Minister.

According to him, the hardest part of the job is to find and assess opportunities that yield results in the future and to find effective economic mechanisms to allow these technology solutions to develop.

Medvedev stressed that concrete steps to achieve the goals should be reflected in the roadmaps STI. In the development of road maps was attended by representatives of business, scientists, venture investors and development institutions and government officials. At today’s meeting will be discussed the first four of the roadmap: “AutoNet” (vehicles and transport infrastructure), “AERONET” (aviation), “Neuronet” (neuro) and “Marinate” (Maritime transport).

According to him, government decision with the approval of the roadmap should be presented to him for signature no later than Monday.

“The road map provides for the adoption of certain government documents that their interagency coordination was held quickly and efficiently, you need to assign to each card, for each of the directions of the supervising Federal Ministry… This Ministry will also need to coordinate further implementation of measures, including to provide financial support for projects of the initiative within the state programs”, — said the Prime Minister. Road map “AutoNet”, “AERONET” and “Marinate” will be assigned to the Ministry of industry and trade, and “Neuronet” — for the Ministry of health.

He recalled that for the implementation of the road maps of STI in the 2016 budget provides for the allocation of funds in the amount of 10 billion rubles.