The Russian President will also participate in the meeting of the Supreme Eurasian economic Council. The event is planned to approve the basic directions of economic development of the Eurasian economous until 2030. 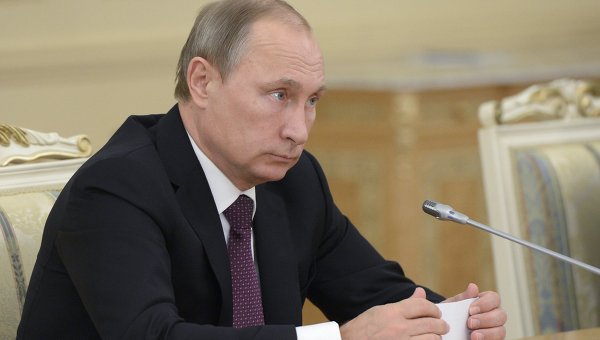 MOSCOW, 16 Oct. The President of Russia Vladimir Putin will take part in session of Council of heads of States of the CIS and the Supreme Eurasian economic Council, which will be held on Friday in Kazakhstan in the settlement of Burabai.

According to the results it is expected the signing of several documents, including the adoption of the joint statement of heads of the CIS on combating international terrorism and approval of the basic directions of development of the Eurasian economic Union (EEU) by 2030.

It is expected that on the sidelines of events, Putin will also hold several bilateral meetings.

The summit agenda includes 17 issues and suggests the adoption of respectively 17 documents for each of them. Their participation in the meeting, besides the presidents of Kazakhstan and Russia, confirmed the heads of Azerbaijan, Armenia, Belarus, Kyrgyzstan, Tajikistan, Uzbekistan. From Moldova will participate Prime Minister, Turkmenistan Vice-Premier, the level of Ukrainian participation is clarified, said the Russian presidential aide Yuri Ushakov.

“I mean that in a narrow format, the leaders will mainly concern four issues on the agenda. This statement of heads of States on the occasion of the 70th anniversary of the UN Declaration of the heads of States on combating international terrorism, the chairmanship in the CIS next year the presidency was handed over from Kazakhstan to Kyrgyzstan, and also the venue of the next meeting of the Council of heads of States,” said Ushakov told reporters.

It is planned that the heads of state will also make reference in connection with the 30th anniversary of the accident at the Chernobyl nuclear power plant and will discuss topical regional and international issues. According to Ushakov, during a private meeting in narrow structure will take place exchange of views on topical issues of multilateral cooperation within the CIS in view of the upcoming in 2016 the 25th anniversary of the Commonwealth.

“Naturally, in the context of increasing threats and instability in Afghanistan, the middle East and North Africa, special attention will be paid to increasing the practical results of cooperation in the sphere of security and law enforcement. Of course, our President will report on the operation in Syria,” — said the assistant to the President of the Russian Federation.

With the aim of strengthening the interaction of States-members of Commonwealth in the sphere of border cooperation and counteraction to new challenges and threats is expected to take decisions on the formation of a group of border and other agencies, aim to resolve crisis situations at the external borders, as well as programmes of cooperation in strengthening border security at the external borders for 2016-2020. These documents will improve the effectiveness of the measures taken in the sphere of ensuring security of external borders, will contribute to the improvement of necessary legal base and increase relations with border authorities of countries outside the CIS, said Ushakov.

“In the context of improving the effectiveness of multilateral contacts in the military sphere it is planned to sign a corresponding cooperation Concept till 2020”, — said the assistant President of the Russian Federation

In addition, it is planned to discuss and adopt a number of documents in the field of law enforcement, among them — the agreement on the establishment of the Board of Directors of the penitentiary services, the agreement on the procedure of establishment and activities of joint investigative groups in the territories of CIS countries, the Convention on the use of judicial decisions in respect of persons sentenced to punishments not connected with imprisonment, and the decision to the head of the antiterrorist center. Also it is planned to sign agreement on cooperation in the field of prevention and liquidation of emergency situations.

The agreement establishing the CIS was signed by Russia, Belarus and Ukraine on 8 December 1991. The Commonwealth brings together Russia, Azerbaijan, Armenia, Belarus, Kazakhstan, Kyrgyzstan, Moldova, Tajikistan, Turkmenistan, Uzbekistan and Ukraine. Georgia withdrew from the CIS on 18 August 2009, but continues to participate in more than 70 treaties and agreements within the CIS, mostly on the economic front.

In the CIS about 70 bodies of branch cooperation. They develop multilateral cooperation in major sectors of the economy, the issues of humanitarian cooperation, the fight against crime and terrorism, in other spheres of life of the States members of the Commonwealth. The funding bodies of the Commonwealth is managed from the single budget of the CIS, formed on the basis of equity participation of States parties and approved by the heads of government. The budget for 2015 amounts to 917 million rubles, of which 580 million (64%) — the contribution of the Russian Federation.

The meeting of the Supreme Eurasian economic Council

The upcoming meeting will be the second full-length meeting of the heads of member States since the launch on 1 January 2015 of the Eurasian economic Union. It will be attended by the presidents of the countries-members of the Union — Russia, Belarus, Kazakhstan, Armenia, Kyrgyzstan.

It is also expected a decision on the formation of the new working group that will study the issue of creating a unified system of identification of participants of foreign economic activity.

“It comes to implementation throughout the Union customs identification number. The implementation of this will allow to unify requirements for clearance of imported to the territory of the Union of goods and to simplify the procedure of customs settlement that ultimately will play into the hands of the business of our countries”, — said the assistant to the President of the Russian Federation.

Also, according to him, we have to approve the list of services sectors, which eventually will be the process of liberalization. It intends to make 21 the services sector, including individual segments of the building advertising business, audit services. In addition, at the meeting of the Supreme Eurasian economic Council is expected to consider the documents relating to the responsibilities of the EEU and its bodies.

“Will be discussed the questions of cooperation with foreign partners, approved the main directions of international activity of the Union for 2015-2016. Exchange of views by the presidents on the issues of deepening of the international legal personality of the Eurasian economic Union. It is expected that on October 19, the Eurasian Union will receive the status of observer at the UN General Assembly,” — said Ushakov.

“Because the foreign partners are still interested in cooperation with Eurasian Union in may, let me remind you, was signed the agreement on creation of free trade zone with Vietnam, the question about how to start similar negotiations will also be discussed, in particular, about the beginning of negotiations with Israel. Let me mention that at the expert level there is a study of the possibility of concluding agreements on free trade zone with India, Egypt and Iran,” he added.

In addition, there will be discussed issues of deepening trade-economic cooperation of the EEU with China, primarily interfacing with the project “silk road” and cooperation with the EU.

Earlier Russia repeatedly urged European partners to start the integration project of the EEU and the EU. Speaking at the Munich security conference in February 2015, German Chancellor Angela Merkel said that the EU is interested in building a “greater Europe from Vladivostok to Lisbon”.

It is also planned to discuss changes in the structure of the Eurasian economic Commission and its Board in connection with the accession to the EEC to new member States — Armenia and Kyrgyzstan, and to coordinate future appointments, as well as to decide on the time and place of the next meeting of the Supreme Eurasian economic Council.

AAAS is an international integration economic Union created on the basis of the Customs Union and the common economic space and functioning from January 1 of the current year. Members of the EAEC are Russia, Armenia, Belarus, Kazakhstan and Kyrgyzstan.