Valentina Matvienko will perform at the opening Assembly of the IPU, a General discussion which will focus on “Moral and economic commitment to a fairer, more organized and more humane migration.” 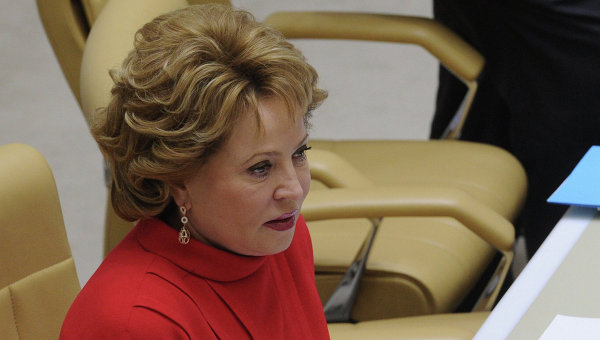 MOSCOW, 17 Oct. The delegation of the Federation Council headed by Chairman of the upper chamber Valentina Matvienko will pay a three-day working visit to Geneva, where he will participate in the 133rd Assembly of the inter-Parliamentary Union (IPU), to discuss migration issues and cybersecurity.

On the eve of the Assembly, the Federation Council speaker will meet with the leadership of the Union — the IPU President Saber Chowdhury and Secretary General Martin Chungong.

It is planned that Matvienko will perform at the opening Assembly of the IPU, a General discussion which will focus on “Moral and economic commitment to a fairer, more organized and more humane migration.”

The senators will also participate in the hearings and panel discussions of the standing committees of the IPU on peace and international security; on sustainable development, Finance and trade; Affairs of the United Nations. The standing Committee of the IPU on issues of democracy and human rights discussed and adopted a resolution on “Democracy in the digital age and the threat to privacy and individual freedoms”.

During the visit, he will meet with Matvienko, Chairman of the parliamentary Assembly of the Council of Europe Anne Brasseur, as well as heads of international organizations, whose headquarters are in Geneva. In particular, discussions will be held with the Director General of the International organization for migration William Swing, head of the office of the UN high Commissioner for refugees antónio Guterres, Director General of the world health organization Margaret Chan. On the sidelines of the Assembly’s scheduled discussions with counterparts from national parliaments of several countries.

The head of the international Committee of the Federation Council Konstantin Kosachev does not exclude “surprises” when the emergency or extraordinary to discuss the organization and added additional questions. So, at the last session of the IPU in Vietnam discussed the situation in the middle East, and a year ago in Geneva, the representatives of Western countries proposed to discuss the situation in Ukraine. However, this proposal gained only a third of the votes of the meeting participants, said Kosachev. He also noted that U.S. officials do not participate in the activities of the organization, because a free exchange of opinions, listening to each other is not interesting to Americans.

For activities of the IPU, held in late August — early September in new York the Russian delegation did not go, because the U.S. government gave Matvienko “truncated visa” because of the sanctions imposed against the parliamentarians of the Russian Federation in connection with the country’s position on Ukraine.