In Ukrainian shops selling wine under the brand “Massandra”, which is bottled in Kherson region at the facilities of LTD. “Kamyanka global vine”. In “Massandra” believe that it is damaging to the image of the unique Crimean enterprises. 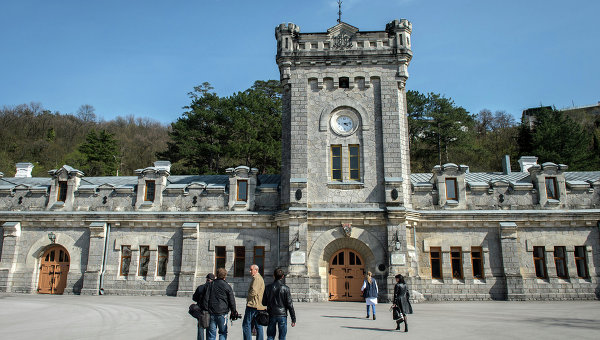 SIMFEROPOL, 18 Oct. The Federal state unitary enterprise “PJSC “Massandra” initiate legal proceedings in respect of Ukrainian producers of wines with duplicates, which are sold in Ukraine under the brand of “Massandra”, said on Sunday the head of the enterprise Yanina Pavlenko.

The company received samples of the wines, which are sold in Ukrainian shops (in particular, in the city of Kharkiv) under the brand name “Massandra”. According to the back label on several types of wines, bottled products in the Kherson region at the facilities of LTD. “Kamyanka global vine”. Address of factory in the village Traducement berislavsky region of the Kherson area, the legal address of the company is in Kiev.

“We knew about these plans in Ukraine. The production of these wines has nothing to do with us and is detrimental to the reputation of the unique Crimean enterprises. We definitely will not leave without reaction and will submit to the court,” — said Pavlenko.

Currently products Crimean “Massandra” in Ukraine are not delivered, the company told BelTA. Pavlenko reminded that Massandra wines can be produced only from the Crimean grapes and the wine, produced in the Kherson region, “Massandra”.

“The same situation applies to the production of sparkling wines factory “Noviy Svet” was founded as “Massandra,” by Prince Lev Golitsyn in the nineteenth century. “New Light” there can be only one” — said Pavlenko.

The price realized in Kharkov shop “Ukrainian Massandra” — 62-63 Ukrainian hryvnia, which at the current exchange rate is about 180 rubles, and for 100-120 rubles below the selling prices of the Crimean enterprises. Among other things, Kherson manufacturers have released a product called “red semi-sweet”, which is a nonsense for “Massandry”, said the press service of the Crimean winery.

Federal state unitary enterprise “PJSC “Massandra” in the administration of the President of the Russian Federation” — the winery with eight units of primary winemaking. The wine collection consists of up to a million bottles and is listed in the Guinness Book of world records. Founded as a factory of sparkling wines “New world” by Prince L. S. Golitsyn — the founder of Russian industrial winemaking.