General Director of “VimpelCom” Mikhail Slobodin Executive Vice President, sales and service of the company Sergey Rumyantsev offered to passers-by and visitors a new salon to connect to the operator’s services, as well as advising potential clients. 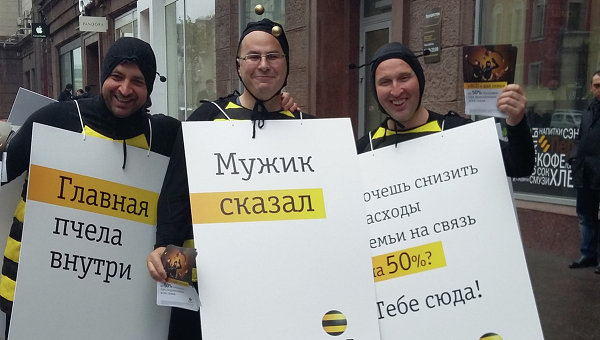 MOSCOW, 19 Oct. The General Director of “VimpelCom” (brand “Beeline”) Mikhail Slobodin Executive Vice President, sales and service of the company Sergey Rumyantsev worked in costumes bees at the opening of a new salon operator, the correspondent.

Thus managers have supported well-known Telecom analyst Eldar Murtazin, who lost the battle Slobodino. Murtazin spring in his microblog on Twitter wrote, referring to data sources that Slobodin will leave the post of the head of “VimpelCom” in September. The analyst proposed a bet: if he stayed at his post by October, Murtazin will work in the sales office of “Beeline” in the bee costume, which is for many years the symbol of the operator. Murtazin has agreed to bet, and on 8 October he admitted defeat.

After that, Slobodin on his page in Facebook said that he will support PrepareSchema and will also dress up like bees, to leading analyst Mobile Research Group “was not so sorry for the bad forecast”.

As a result, in Monday Slobodin, Murtazin and Rumyantsev, dressed in black and yellow bee costumes and wearing hat with “antennae”, a few hours worked in the new salon operator on Tverskaya — one of the Central streets of Moscow, a few hundred meters from the Kremlin. So, they offered to passers-by and visitors of the salon to connect to the operator’s services, as well as advising potential clients. They willingly posed for journalists and passers-by for photos.

After “change” Murtazin said that he managed to sell an expensive contract and iPhone. “I sold the iPhone 6s 16 GB of memory for a total of 59 thousand rubles and VIP tariff plan “All 6 thousand rubles”, — he said. According to Murtazin, this is not his first experience in retail outlets of various retailers. “I often work at the point of sale. Today, from the point of view of performance, everything was fine, we did it,” said Murtazin.

In 2013, British billionaire Richard Branson lost a bet to his friend Tony Fernandez and the day became a stewardess of AirAsia.