The bill envisages a possibility if the MP of any level is not provided in time income statement, to deprive of its mandate. 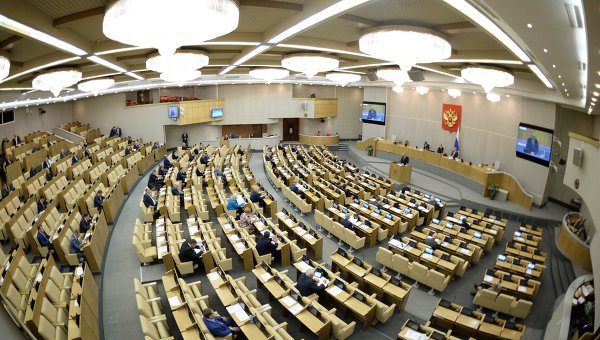 MOSCOW, 21 Oct. The state Duma meeting on Wednesday adopted amendments to the second reading of the draft law on deprivation of deputies mandates for the not declared in the period income and expenses.

In particular, in accordance with the amendments, it becomes possible to revoke the mandates of parliamentarians of all levels working on a permanent and non-permanent basis, and persons holding municipal office if they are not provided within the period of the income statement.

Under current law, deputies and members of Federation Council annually by April 1 submit information about income, expenses, property and property liabilities of themselves, their spouses and minor children. However, the responsibility for the failure to submit or untimely submission of this information is missing.

To eliminate the legal gap, the deputies proposed to establish the obligation to submit the specified information and special responsibility in the form of early termination of powers. This type of responsibility is already provided for opening accounts (deposits), store cash and values in foreign banks located outside Russian territory, possession and (or) use foreign financial instruments.

According to the table of amendments for the second reading, the prohibition to open and maintain accounts (deposits), store cash and values in foreign banks, own and (or) to use foreign financial instruments is proposed to extend to the heads of municipalities, acting heads of local administrations, heads of local administrations and deputies of representative bodies of municipal districts and urban districts to exercise their powers on a permanent basis, the deputies occupying positions in representative bodies of municipal areas and urban districts.

The duty to provide information about their income and assets, information on income and assets of their spouses and minor children, as well as the obligation to report the occurrence of a personal interest that could lead to a conflict of interest, extends also to persons holding state and municipal positions on a temporary basis. Provides that the Federal law “On control over compliance costs of persons holding public office, and other persons to their income” applies to persons occupying municipal positions on a temporary basis.

The entity for which the draft law establishes the above-mentioned prohibition, are obliged within three months from the date of entry into force of the law to close accounts (deposits), cease storage of cash and valuables in foreign banks and to dispose of foreign financial instruments. In the event of default of the duties of such persons shall be obliged to terminate the powers. If they can’t fulfill these requirements in connection with the arrest, prohibition orders imposed by the competent authorities of a foreign state or in connection with other circumstances independent of their will, such claims must be made within three months from the date of termination of arrest, prohibition, or order the cessation of other circumstances.