The President will speak at a session. Vladimir Putin, told the President’s press Secretary Dmitry Peskov, somehow expressing my point of view on the world conjuncture. 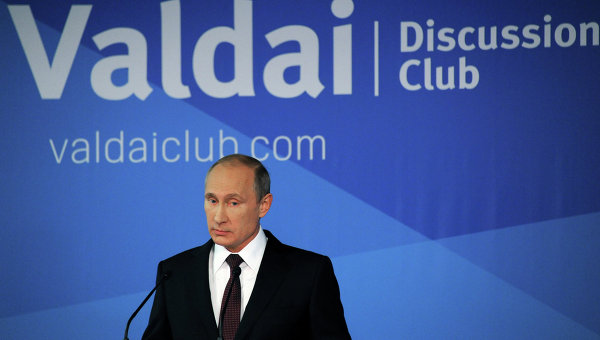 MOSCOW, 22 Oct. Russian President Vladimir Putin on Thursday will take part in discussion club “Valdai”, which sounds like “War and peace — man, the state and the threat of conflict in the twenty-first century”. As expected, Putin at a meeting with participants of the Valdai club will Express its position on the situation in the world.

As told the press Secretary of the Russian President Dmitry Peskov, Putin is scheduled to speak at a session.

“This is the next session of the international discussion club “Valdai”… the Theme this year is “War and peace” — can be very useful considering what happens in world Affairs. Of course, you can with great interest the speech of the President. We can safely assume that the President is somehow going to Express again my point of view on the world situation,” Peskov said.

The twelfth annual meeting of the international discussion club “Valdai” in Sochi will be held October 19-22. The club will be attended by more than 130 leading experts from 30 countries and Russia. Putin has annually adopted club member (2004-2007 and since 2012 as President of Russia, in 2008-2011 as Prime Minister). During the days of the club participants have discussed questions of war and peace and Russian literature.

The expectations of experts

Club members expect this year Putin during his speech will give a detailed evaluation on three main themes: the crisis in Syria, the implementation of the Minsk agreements and the development prospects of the Russian economy.

According to club member, Director of the Center for public administration and public policy, Carleton University (Canada), Piotr Dutkiewicz, the expert community expects that will be presented to a peaceful, diplomatic settlement of the crisis in that country.

Not less important topic, he said, is the implementation of the Minsk agreements, as well as the associated “expectations of the Russian leader towards the European community, including the aspect of lifting of sanctions”.

Many of the participants of the meeting expect Putin’s speech regarding the internal situation in Russia. Experts interested in how to strengthen the Russian economy will affect Russia’s policy in international relations.

The history of the club

International discussion club “Valdai” — a periodic meeting of experts specializing in the study of external and internal policy of Russia.

Discussion club “Valdai” was created in September 2004 on the initiative of the Russian Agency of international information. The purpose of the club is strengthening and development of dialogue between Russian and foreign scientists, politicians and journalists; the formation of an independent, objective, scientific analysis of political, economic and social processes in Russia and in the world.

Over the years, the Valdai club was attended by over 800 representatives of the international scientific community from nearly fifty countries around the world.

The club meetings are held annually. The program of summits usually consists of two blocks. First, expert-discussion part takes place in one of the Russian regions, which is selected by the organizers of the club in accordance with the main theme of the meeting. Since 2004, club representatives visited ten Russian cities besides Moscow: Veliky Novgorod, Tver, Khanty-Mansiysk, Kazan, Rostov-on-don, Grozny, Sochi, Yakutia, St. Petersburg, Kaluga. The second part of the program of the meeting of foreign participants of the conference with leading Russian newsmakers — the heads of ministries and agencies, Federal Assembly, well-known political and public figures.

In 2014 the club meeting was held under the title “the World order: new rules or a game without rules?”. During his speech at the forum the President of Russia Vladimir Putin has expressed opinion that on the world stage it is possible to reach agreement in particular if to restore the effectiveness of the system of international and regional institutions. According to Putin, it concerns the improvement of the work of the UN and the OSCE, which, as noted by the President, for 40 years “proved to be a popular mechanism for security and cooperation in the Euro-Atlantic area”.