For the first nine months of 2015 in the Leningrad region introduced a 1.8 million square meters of housing, which is 70% more than in the same period of 2014. Traditionally a third of the total volume of individual housing construction 624 thousand square meters. 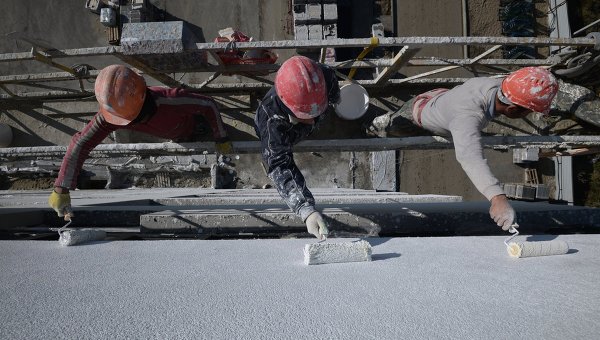 “The document provides information and analytical cooperation and collaboration of the parties in order to improve the efficiency of industrial enterprises. The construction industry needs continuous updating and upgrading, which improve the quantity and quality of housing, social and infrastructure facilities”, — said the Chairman of the regional Committee for construction Vitaly Zhdanov at the signing ceremony of the agreement.

The document sets out measures to support the construction complex of the region to maintain growth in housing and social construction, improving competitiveness in the domestic market, production capacity and main economic indicators.

The experts interviewed commended the current pace of development of construction complex in the Leningrad region. “The pace of housing construction in Leningrad region continue to show high growth. Long-standing forecasts that by 2018 will be put into operation on 3 million square meters a year, come true,” said the President of Lenoblsoyuzstroy Georgy Bogachev.

So, for the first nine months of 2015 in the Leningrad region introduced a 1.8 million square meters of housing, which is 70% more than in the same period of 2014. Traditionally a third of the total volume of individual housing construction 624 thousand square meters. The target for new housing this year has already exceeded by 12%. At the moment, construction is underway on 593 sites with a total area of 8.8 million square metres. Leaders in housing construction is the Vsevolozhsk, Lomonosov, Gatchina and Tosno districts.

According to Bogachev, the effective demand is always dependent on the General development of the economy. “If the situation will worsen, then a lot depends on the action taken by the authorities. The state has the opportunity to direct resources to support the economy, one such method is the construction of infrastructure facilities, roads, utility networks and more. This should motivate the rest”, — said the expert.

The expert noted that urban planning policy in the Leningrad region is a “reasonable social policy obligations”. “In addition, since no additional load in the form of social charges, housing is cheaper,” — said Sinochkin.

Also in the Leningrad region in the framework of implementation of “Setobject in exchange for taxes” currently signed 19 cooperation agreements between developers, the government of the Leningrad region, administrations of municipal districts, administrations of urban and rural settlements. Until the end of 2022 it is planned to build 62 of the object: 46 kindergartens 6 thousand 635 seats and 16 schools in 13 439 thousand places (built 13 kindergartens and four schools).

In the framework of targeted investment program this year commissioned seven social facilities. This is a kindergarten for 280 places in Shlisselburg, polyclinic for 380 visits per shift in the New Devyatkino, FAP in the village Ptchevja. beauty of the area, the FAP in the village of Daisies Priozersk district, the gas block-modular boiler house for the hospital “Druzhnosele”, FAP in the village of Volosovsky district of Kursk, FAP in kalozhitsy village of Volosovsky district. The end of the year it is planned to Commission another 34 objects. Of these, ten kindergartens, four schools, ten health facilities, seven sports facilities, a mortuary building and two boilers.