During the meeting the heads of governments discussed the issues of trade and economic cooperation, including implementation of joint projects in energy, industry, transport and agriculture. 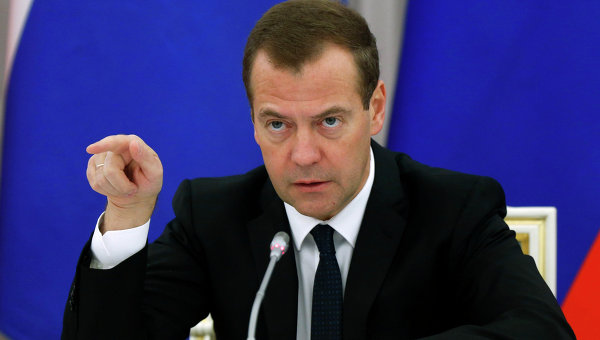 MOSCOW, 27 Jan. Prime Minister Dmitry Medvedev on Tuesday will hold negotiations with his Serbian counterpart Aleksandar Vucic, the results of which is planned to sign several documents.

As reported by the press service of the government of the Russian Federation, during the meeting will be discussed the issues of trade and economic cooperation, including implementation of joint projects in energy, industry, transport and agriculture.

Earlier Russian Ambassador in Belgrade Alexander Chepurin said that the main theme of the visit, Vucic to Moscow will be the expansion of economic cooperation. According to him, “we need to compare notes, to form a position, to justify their own interests, to look at the possibility of expanding cooperation.” In addition, the parties will discuss key international issues that directly affect the interests of the two countries, the Ambassador added.

On Wednesday, Medvedev and Vucic are expected to be guests of the first day of the forum and show technology “Open innovation”, will take part in plenary session of the “Man at the crossroads of the trends of technological revolution”. Last year a similar forum was opened by Medvedev with Prime Minister of China, and the year before — with the Prime Ministers of France and Finland.

Last week the Russian Prime Minister signed a decree, which approved the signing of a Memorandum of understanding between the governments of Russia and Serbia in the sphere of economic cooperation, attraction of investments and implementation of joint projects. Thus, the accepted proposals the Ministry of economic development agreed with the foreign Ministry and other interested Federal bodies of Executive power and previously worked with the Serbian side.

As noted in the reference to the document, the Memorandum defines the main directions of the Russian-Serbian trade and economic cooperation. The implementation of the Memorandum will lead to the expansion of trade in goods and services, diversify and improve its structure, increase of volume of investments between Russia and Serbia, and between them and third countries, said the Russian government.

The foreign Ministers of the EU countries on 22 June had extended economic sanctions against Russia until 31 January 2016, approving the relevant amendments to the EU sectoral restrictive measures against Russia. This statement was joined by candidate countries for EU membership, Montenegro and Albania, as well as Iceland, Liechtenstein, Norway, Ukraine. The authorities of Serbia aimed at accession to the EU has been repeatedly and categorically declared that will not join the restrictive measures against Russia.

Serbia received the official status of candidate country to the EU on 1 March 2012. About the beginning of negotiations on accession of Serbia into the EU was officially announced in January 2014, but since then not a single head of the negotiation dossier was not open.

Earlier, the foreign Minister of Serbia Ivica Dacic said that Belgrade is interested in participating in the project of the gas pipeline “Turkish stream” and urged the EU to clearly define its position on this issue and not create problems. Energy Minister Alexander Novak said earlier that Russia is waiting for, what options the EU proposes for the construction of its domestic gas infrastructure.

In July, Serbian Ambassador in Moscow slavenko Terzic said in an interview that Serbia is interested in diversification of gas supplies, including in the framework of the “Turkish stream”, and expects that all issues will be resolved while respecting the interests of both the EU and the Russian Federation.

Russia in December 2014 due to the unconstructive position of the EU refused from implementing “South stream”, which was to be held on the territory of Bulgaria, Serbia, Hungary, in favor of a new pipeline to Turkey (“Turkish”).

The project “Turkish stream” involves construction of a pipeline capacity of 63 billion cubic meters of gas per year from Russia to Turkey across the Black sea. The pipeline will consist of four threads, and bring to the Turkish-Greek border to 47 billion cubic meters of gas. It is assumed that at the border of Turkey and Greece will be created gas hub, and the EU needs to implement gas transportation capacity for further intake of this gas on its territory.

An example of successful collaboration is the project of reconstruction and further development of JSC “Naftna Industrija Srbije” (JSC “NIS”), the principal shareholder and the investor of which is OAO “Gazprom Neft”. Of depressive and unprofitable enterprises of the JSC “NIS” within just a few years took up a position as a regional leader in its industry. Now JSC “NIS” at the expense of taxes and fees provides up to 15% of a profitable part of the Serbian budget.

A great contribution to the revival of the economy of Serbia makes the project of reconstruction and modernization of Serbian Railways with the participation of JSC “RZD international” in the bill approved in 2013 the Russian export loan in the amount of $ 800 million. We are talking about translating “on the modern rails” of the main rail routes of the country, connecting Belgrade with EU countries and the Adriatic coast, providing transit traffic.

In terms of the migration crisis reiterated its demand for Russian-Serbian humanitarian center (RSHC) in the city of NIS, assisting in the equipping transfer stations. On line RSGC Serbian side received in the use of 11 units of modern fire equipment in the total amount of $ 9 million.

The level of trade between countries in 2014, according to the Federal customs service of Russia, has reached $ 2.1 billion, which is 7.6% higher than a year earlier. This is an important indicator of the quality of the Russian-Serbian interaction, even in conditions of difficult world market conditions, said the government office.

In 2015 the trend has changed, primarily because of the volatility of exchange rates and of prices of primary products, including hydrocarbons and energy. In the first eight months of the current year recorded a decrease in the volume of bilateral trade in 27,09%.

According to the Ministry of economic development, at the end of 2014 in Serbia, we accumulated more than 3,9 billion dollars of investment from Russia.

In light of the Serbian chairmanship in the OSCE in the current year Russia States a responsible and balanced course of Belgrade, balanced position on the Ukrainian settlement, according to the office of the government of the Russian Federation.

Traditionally special attention to Russian-Serbian dialogue given to the maintenance of peace and stability in the Balkan region, especially in the framework of Kosovo settlement. Russia continued to provide support to Serbia in defending its sovereignty and territorial integrity in relation to Kosovo based on international law.

Events memorial nature, marking the 70th anniversary of Victory in the great Patriotic war, the presence of President Tomislav Nikolic in Moscow at the celebrations of 9 may, the participation of the Serb units in the Parade on red square has cemented the unity of the approaches of Russia and Serbia to a common historical heritage, counteraction to attempts of revision of history, primarily the outcome of world war II.