To limit political interference in the gas pipeline project, it is necessary to resolve the issue of the role of Ukraine as a transit country, said Vice-Chancellor of Germany Sigmar Gabriel. 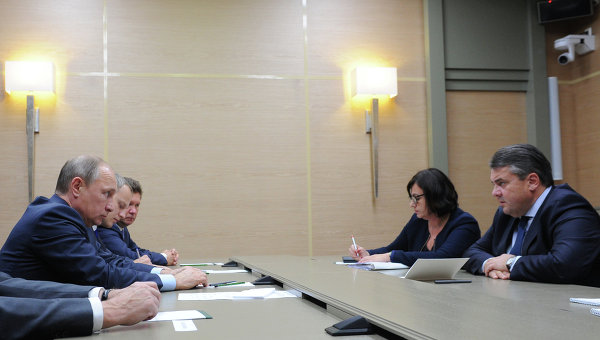 NOVO-Ogarevo, 28 Oct. The project of the gas pipeline “Nord stream-2” is very interesting for Germany, it is necessary to limit the possibility of political interference in its implementation, said the Vice-Chancellor of Germany, Sigmar Gabriel at a meeting with Russian President Vladimir Putin.

The shareholders ‘ agreement the joint project company New European Pipeline AG, which will deal with the construction of the gas pipeline “Nord stream-2”, was signed on 4 September. The shareholders entered “Gazprom” (with a share of 51%), E. On (10%), Shell (10%), OMV (10%), BASF/Wintershall (10%) and Engie (9%). The project involves the construction of two pipelines with a total capacity of 55 billion cubic meters of gas per year from the coast of the Russian Federation through the Baltic sea to the German coast.

According to the Vice-Chancellor, the parties will continue to move in the direction of this project. “It is our interest. Not only the interests of Germany, but also abroad, a very interesting project. Most importantly in this regard, as to legal matters to all of it would remain in the competence of the German authorities. If we have time to do it, then the possibility of external interference will be limited,” added Gabriel.

“We are on a good path of negotiations on this issue. To limit political interference in these issues, it is necessary to provide, to solve, to settle the question of the role of Ukraine as a transit country…. This has technical reasons, and you know that the condition of the gas transportation system in Ukraine is not in very good condition. But, of course, financial and political role it will play for Ukraine regarding reverse gas flow. Everything else we can handle this, most importantly, in the hands of the German authorities remained the competence of those issues, to restrict the issuance of permits, and so, reduce the possibility of political interference on this project,” said Gabriel.