In Tajikistan will be a meeting of the Council of heads of governments of the Commonwealth of independent States, the results of which it is planned to sign more than 40 papers covering a variety of areas. 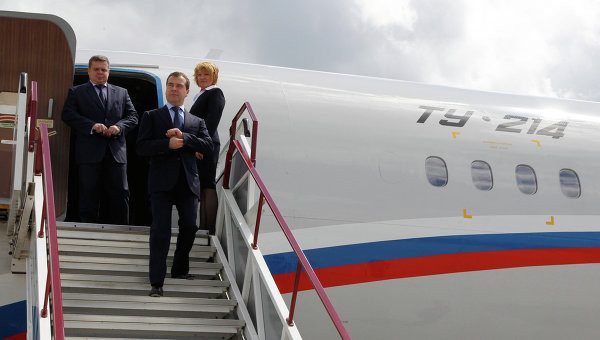 DUSHANBE, 29 Oct. Russian Prime Minister Dmitry Medvedev arrived in Dushanbe to host meeting of Council of heads of governments of the Commonwealth of independent States, according to the government office.

The Prime Minister will take part in Council meetings in narrow and expanded structure, it is expected the meeting of Medvedev with Prime Minister of Armenia Hovik Abrahamyan.

According to the results of the Council will be the signing of the documents.

As reported in the Russian government apparatus, the agenda includes consideration of about 40 papers, the main attention will be devoted to the development of trade and economic cooperation, humanitarian ties, financial and socio-economic spheres, as well as cooperation in the area of law enforcement. In particular, heads of government will consider the implementation of the provisions signed in 2011 Agreement on free trade zone.

At the meeting of the Council is expected to approve the plan of measures on implementation of the third stage of the Strategy of CIS economic development until 2020, which provides for the implementation of scientific-technical and educational potential of the Commonwealth, the development of the innovation economy and nuclear energy, the use of alternative and renewable fuels and energy, as well as the development of new infrastructure projects.

According to the officer of the government of Russia to sign the prepared draft agreement on conditions of mutual inter-operator calculations at providing international telecommunication services in CIS countries.

It is also planned to consider the report on the state of competition on commodity markets of drugs and report on improving the financial literacy of consumers.

A number of documents, according to the office of the government of Russia on cooperation in prevention and liquidation of consequences of emergency situations, as well as financial aspects of the development of the United air defense system of the CIS (since 1995) and support the work of the Committee on air defense under the Council of defense Ministers of CIS countries.

Finally, the Council will consider the plan for the 25th anniversary of the CIS, which will be celebrated in 2016, and will adopt action plans to implement the strategy of international youth cooperation and the development of physical culture and sports.

The agenda also included a number of personnel issues: the planned ratification of the Chairman of the interstate statistical Committee and the Deputy head of the CIS Antiterrorist center.