The member of LDPR Yaroslav Nilov believes that the MP must work with voters, as well as work at the meetings of the chamber and to pay the bills. According to him, if the willingness to work there, the place should be free for more responsible colleagues. 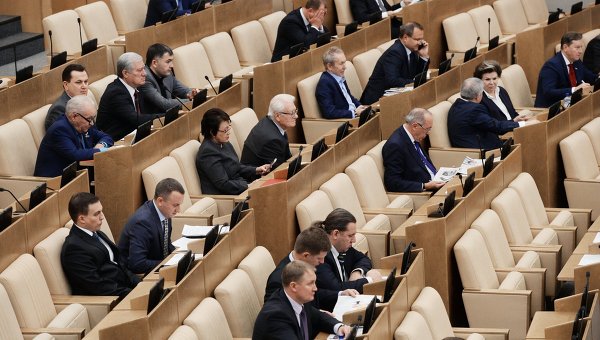 MOSCOW, 29 Oct. LDPR faction makes Thursday a bill providing for the early termination of powers of the Deputy of the state Duma or the Federation Council member, if he does not attend meetings of the relevant chamber of Parliament, told journalists the Deputy Yaroslav Nilov.

The draft law proposes to pass the resolution of the state Duma concerning the termination of powers of the Deputy upon a proposal of the faction to which they belong.

“Recently the State Duma adopted a law under which shall be early terminated the powers of Deputy of the state Duma or the Federation Council member, if he has not submitted information about income and property (or have made it in time). We believe that such a sanction it is important to enter and for failure to perform essential duties of the members of both houses of Parliament”, — said Nilov.

According to him, the MP should visit the supervised regions, communicate with the people there, hear their complaints, accept written requests and respond to them, if necessary to raise the issue at the Federal level, in the media, at meetings of the chamber, to introduce draft laws.

“In the schedule of state Duma there is a special week for work with voters. And in the event of acute problems in the region can go there at any time! The people waiting for help, want to be heard. No preparedness for such work? Then you need to make room for more responsible colleagues”, — concluded the MP.

Earlier, Deputy speaker of the state Duma from LDPR Igor Lebedev said the newspaper “Izvestia” that the deputies Ilya Ponomarev and Alexey Mitrofanov went abroad and for a long time do not perform their duties, “and the salary they get both and have all the statuses, we believe that this is wrong.”