ROME, October 29. /Corr. Faith Shcherbakov/. More than 700 thousand cars manufactured by the German concern Volkswagen sold in Italy, equipped with software (SOFTWARE) that allows you to falsify the results of environmental tests. This was stated on Thursday Minister for infrastructure and transport of Italy Graziano, Delrio. 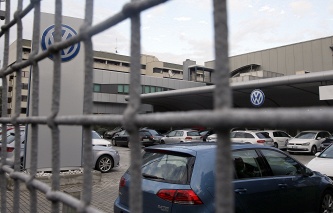 National high court of Spain to investigate the case against Volkswagen

Volkswagen for diesel scandal received in the 3rd quarter loss of 3.5 billion Euro

Media: the British government knew about the “oil scandal” in 2009

“The Volkswagen Group recently reported that in Italy 709 712 vehicles in which diesel engines are” distressed, said the Minister, adding that we are talking about the brands Volkswagen, Audi, Seat and Skoda”. He noted that his Agency has drafted a plan of inspections of machines, and their review is scheduled to begin from January 2016. Verification, according to him, there will also be cars from the government fleet.

Italian prosecutors have launched an investigation against the leadership of the Italian division of Volkswagen, and in the company’s offices were previously raided.

The German company was at the center of a scandal after the discovery on vehicles with diesel engines are software that allows you to bypass strict ecological standards of the USA. The investigation into the auto giant launched in several countries in Europe and Asia. As noted in the statement by Volkswagen, the problem of falsifying data environmental tests on the content of harmful substances in exhaust gases of vehicles affected to 11 million cars worldwide.