DONETSK /Rostov region/, October 29. /Corr. Dmitry Bulanin/. The owner of the Voronezh hotel “Euro” Vladimir Chaplygin told in court that were allowed to settle Nadiya Savchenko in the room without documents at the request of the police, reports Corr. from the court. 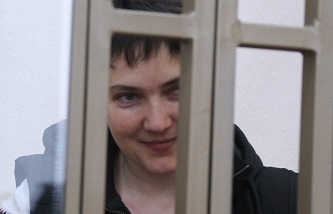 “I was on vacation and had a call (from the administrator of the hotel – approx.TASS) with the request to place the person without documents. I wasn’t particularly interested in how it will be paid. As I understand it, it asked for an employee post (traffic police – ed.), I decided later to pick up the money, as usual. The first time I was invited to the UK, said there was Savchenko. I was at 2.5 thousand kilometers on the seashore on vacation and roaming, and so the conversation was short,” said Chaplygin.

He noted that the hotel is a family business. “Nearby traffic police post, we have normal relations, they send us acquaintances and friends. For traffic police, one price for regular customers is another. We are not required information about the visitors to pass to the police. Video surveillance has never been in a hotel were dummy cameras,” said the witness.

Earlier the employee of the Ministry of internal Affairs of the Voronezh region Alexey Sazonov has informed in court that Savchenko was taken to the hotel by private car. According to defendant, she was there a week under guard of the FSB.

Consideration on the merits of Nadezhda Savchenko in the Donetsk city court began on 22 September.