MOSCOW, October 29. Local elections in Ukraine did not contribute to overcoming the division in society, said the official representative of the Russian foreign Ministry Maria Zakharova. 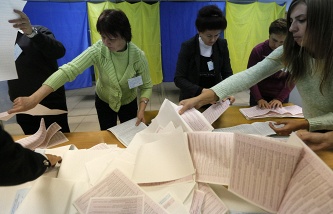 Vitali Klitschko is leading in the elections of Kyiv mayor

In Svaliava, Zakarpattia municipal electoral Committee has taken under protection of submachine gunners

Saakashvili: the Prosecutor’s office will withdraw the ballot papers on problem areas in Odessa

“The current campaign has not contributed to overcoming the division in society and the division of the country, – said the diplomat. – Contrary to the claims of official Kiev authorities, the tendency is only amplified.”

According to Zakharova, the Ukrainian law on local elections does not meet a number of OSCE commitments. “Moment, which has a negative impact on the election procedures in Ukraine, was the adoption of an extremely fragmented law on local elections, which complicates his understanding,’ she said. – In addition, this law does not meet some of the obligations of Kiev in the framework of the OSCE, it was noted by representatives of the organization”.

About the meeting in “Norman format”

The meeting in “Norman format” level of foreign Ministers can pass next week, said Maria Zakharova.

“And discussed the possibility of holding a meeting in the “Normandy format” foreign Ministers, said the official representative of the Foreign Ministry. – It comes next week. When will be agreed upon time and place, we will announce”.

Earlier, a source in Kiev reported that the meeting of Ministers may take 6 November in Berlin.