DONETSK /Rostov region/, November 2. /Corr. Dmitry Bulanin/. The shelling, which killed Russian journalists near Lugansk in 2014 began when on the road there were refugees. On Monday in the trial of former Ukrainian army Hope Savchenko said a secret witness, which was given the name Ivan Ivanov, reports Corr. from a court hall. 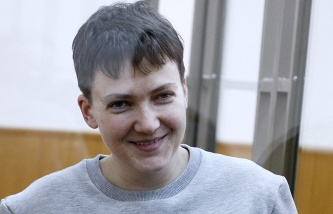 Ivanov reported that in June 2014 he was the Deputy head of the special Department of the battalion “Zarya” proclaimed LNR. “The shelling started after went refugees (fleeing the village of Lugansk Metalist – approx.TASS). The shell exploded not far from them, I later learned that from the civil no one was hurt. In my presence hasn’t hurt anyone. I followed the cartridges,” said a witness who was in the courthouse, but the testimony was given from a nearby audience on the speakerphone and with a changed voice.

On Monday in Donetsk city court continues hearings on the case of Nadezhda Savchenko, which began on 22 September.