TASS-DOSSIER /Alexander Panov/. November 5, 2015 marks 80 years since the release of the Parker Brothers game “Monopoly”, which is the most popular Board game in the world.

The precursor to Monopoly was a game of “Landowner”, developed by the American Elizabeth Maggie to illustrate theories well-known liberal economist Henry George.

“Landowner” was patented in 1904 and has spread in many US States, as well as under a changed name in the UK.

The Creation Of A “Monopoly”

“Monopoly” has been created by us engineer Charles Darrow in 1933.

Her genre – economic strategy. To participate in the game can range from two to eight people, each of which seeks to achieve the bankruptcy of other players, utilizing the initial capital.

In 1934, Darrow offered to buy the rights to Monopoly to Parker Brothers, specializing in the production of Board games, but was refused: the company’s managers found in the project 52 design errors.

Subsequently, Darrow was able to sell in a year about 5 thousand copies of the game.

In the following year Monopoly became the best-selling game in the U.S. (for the year it was purchased about 35 thousand copies).

In 1991, Parker Brothers was acquired by American company Hasbro, which since then owns the rights to sell Monopoly.

To date, the official number of sold copies of the game exceeds 250 million.

Version of the game

In the classic “Monopoly” all objects on the field are taken from the American city of Atlantic city.

In addition, there are a number of special versions for fans of “Batman”, “Star wars”, etc.

A total of “Monopoly” was translated into 47 languages and published in 114 countries.

In the USSR a local variant of the game called “Manager” was first released in 1988.

Spread and other games similar to “Monopoly” built on the principle of economic strategy – “Broker”, “Business 2000” and etc.

In 2010 was released a version of “Monopoly of Russia” on the field showing Russian cities.

In 1974 Professor at the University of San Francisco Ralph Anspach invented an alternative version of the game – the “Anti-monopoly”, which, in contrast to the original, demonstrates the negative effects of monopolies on the economy.

After stretching more than a decade of litigation over the use of trademarks for Anspacher it was recognized the right to issue “Anti-monopoly” under license from Parker Brothers (since 1991 under the license of Hasbro).

Championships in the game Monopoly

From 1973 to the game of “Monopoly” are irregular world Championships.

In September 2015, at the 14th championship, held in Macau, was won by the Italian Nicolo Falcone.

A few facts about Monopoly 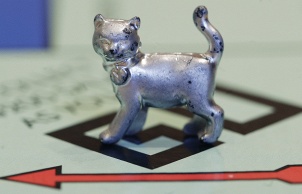