The event was also attended by heads of religious confessions, representatives of public national and cultural organizations, activists of youth organizations and movements in the country. 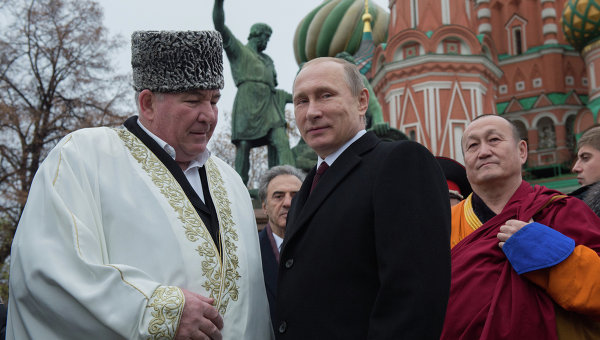 MOSCOW, 4 Nov. The President of Russia Vladimir Putin on national unity Day laid flowers to the monument to Minin and Pozharsky on red square.

The ceremony was attended by Patriarch of Moscow and all Russia Kirill, heads of religious denominations, including the Chairman of the Council of Muftis of Russia Ravil Gainutdin, Supreme mufti, Chairman of the Central spiritual Board of Muslims of Russia Talgat Tadzhuddin, chief Rabbi of Russia Berl Lazar, the head of Russian Orthodox old believers ‘ Church Cornelius, Chairman of the Conference of Catholic bishops of Russia Paolo Pezzi and others.

The event was also attended by representatives of public national and cultural organizations, including Bogdan Bezpalko — the Director of the national-cultural autonomy “Ukrainians of Russia”, Eskender Bilyalov — the Chairman of public organization “Association of Crimean Tatars “Inkishaf”, Nikolai Doluda, — the ataman of the Kuban Cossack troops, the representatives of the “Russian Congress of peoples of the Caucasus” and other national-Autonomous organizations in Russia.

Was also attended by activists of youth organizations and movements in the country.

National unity day is celebrated annually on November 4 since 2005. Holiday appeared in Russia in memory of the events of 1612, when the militia led by Kuzma Minin and Dmitry Pozharsky liberated Moscow from Polish invaders. Historically this holiday is associated with the end of the time of Troubles in Russia in the XVII century.