The leadership of the Republic renders assistance to Ukrainian refugees, as well as the Syrian Circassians who wish to return to their historical homeland, said Aslan Tkhakushinov. Also the head of Adygea noted the high performance of the region in the field of agriculture. 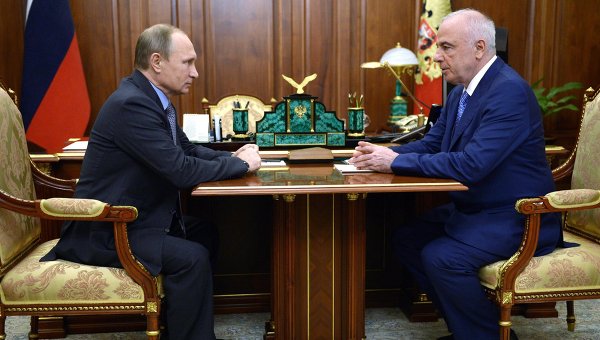 MOSCOW, 6 Nov. The number of refugees from Ukraine in the Republic was halved, all the questions solved by him, the Republic’s authorities are now refugees from Syria, reported the head of the region Aslan Tkhakushinov at the meeting with Russian President Vladimir Putin on Friday.

“The refugees that we had from Ukraine: 6 were thousands, now there were 3 thousand. All the issues associated with them, we decided: children of kindergarten age in kindergarten and school to school. Any complaints on their part that we have offended them in some way, no. Also deal with refugees from Syria,” he said.

According to the authorities of the Republic, Adyghe Diaspora live in 55 countries, including Syria. The Republican leadership is assisting the Syrian Circassians who wish to return to their historic homeland. Since the start of military action in Syria Adygea took 700 compatriots from the country up to 2011, immigrants were only 130. As representatives of the Republican authorities, the returnees help with employment, children returning compatriots are studying at universities, colleges, schools and kindergartens of the Republic, the medical services they receive, along with other fellow citizens.

Tkhakushinov reported collecting a record harvest in the country.

“This latest Russian period is the best indicator,” Putin said.

The social sphere and infrastructure

Tkhakushinov assured that much is being done to improve the lives of the rural population: according to the Federal target program built 28 obstetric units, five kindergartens, pipelines, gas pipelines. Gazofitsirovan of the Republic, according to him, is of 84.3%, which is higher than the national average.

“The budget is executed as of ten months at 108%. We own incomes increased three times: it was 3 billion over a period have reached 9 billion. The subsidy level was 60-something percent, now it is 39%, that is, momentum is building up (to reduce subsidization). Gross domestic product increased by 1.7 times, i.e. also have the growth, index of industrial production was equal to 106.4 per cent,” he said.

Speaking about the social situation, Tkhakushinov called her calm, and assured that the disruption on the performance of “may decrees” of “at least before today, was not and cannot be”.

“Resettlement from dilapidated housing and on payment by the may decrees — salary: no breaches we prevented: 627 million roubles were allocated, more than 800 people have improved their living conditions. Today there are somewhere 304 million, so we in General, this question was closed”, — said the head of the region.

“May decrees” — wide program for the development of social security, which Putin outlined in 2012, immediately after assuming the office of the President, fulfilling a campaign promise.

Adygea — the industrial-agrarian Republic with a mixed economy type. Basic industries are machine building, Metalworking, food processing, forest and wood, fuel, electricity. The leading branch is food industry. One of the priority directions of economic development is agriculture.

Adygea until 1991 was part of the Krasnodar territory as an Autonomous region.